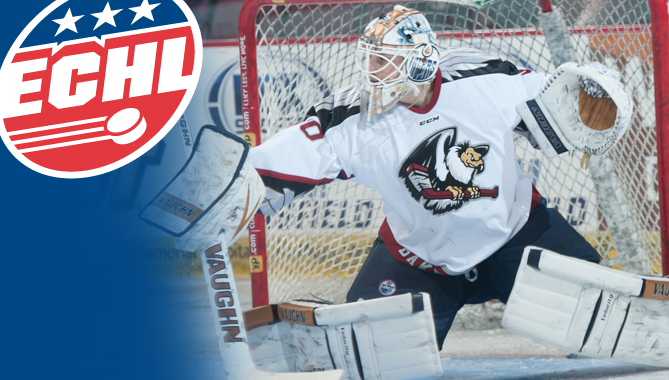 CONDORSTOWN, Calif. – The Bakersfield Condors, ECHL affiliate of the Edmonton Oilers, announced today the G Laurent Brossoit has been named CCM Goaltender of the Week of Dec. 23-29, 2013. Brossoit becomes the first netminder this season to win the award twice, having received the accolade for the week of Oct. 28 – Nov. 3, 2013.

Bakersfield continues their four-game road trip in Colorado on Friday and Saturday at 6:05 p.m. Pacific.

NEXT HOME GAME
Saturday, Jan. 11 vs. Las Vegas
TIP-A-CONDOR – TUES. JANUARY 28
Tickets are on sale now for one of the most anticipated nights of the season, Tip A Condor. This year’s event returns to Firehouse, located at 7701 White Lane, on Tues. January 28 from 5-8 p.m. Every year Condors players trade their hockey gear in and become waiters, all in the name of a good cause. There will be tremendous auction items available to bid on and fans can interact with the players playing games, taking pictures, and more as the guys collect tips for the Kern County Shrine Club. Tickets are $25 and are on sale now. Click here
Tune In:

Choose four upcoming games and save over 20% on box office ticket prices with a Condors FUN 4-Pack. These 4-Packs are the best way to see Condors action AND get some of the best giveaways in Condorstown!

Condors wrap series up in Colorado – TONIGHT
Scroll to top