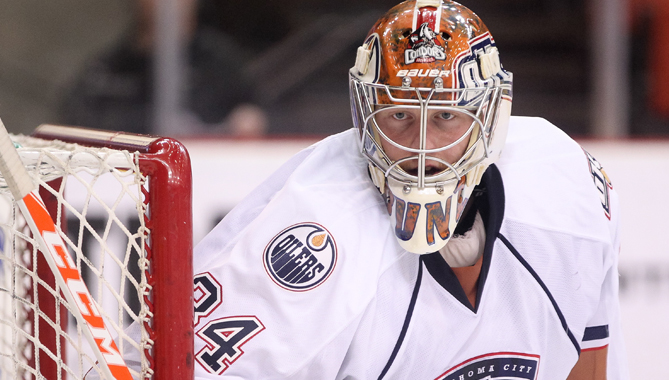 CONDORSTOWN, Calif. – The Bakersfield Condors, ECHL affiliate of the Edmonton Oilers, announced today that G Tyler Bunz has been reassigned to the Condors from their American Hockey League (AHL) affiliate in Oklahoma City.

Watch Bunz on Episode 2 of “Oil Change” which features scenes from his first stint in Bakersfield. He is featured at the 34-minute mark. {Click here} You can catch Oil Change on the NHL Network, check local listings.

The team returns to home ice on Tuesday, Nov. 26 against the San Francisco Bulls for Canned Food Drive Night, sponsored by La Preciosa 105.3. Get a $1 ticket with the donation of two non-perishable food items. Also, in honor of the release of “Hunger Games: Catching Fire,” bring your ticket from any showing of the film at Maya Cinemas and receive $1 admission to the game.

SAVE 40% OFF TEDDY BEAR TOSS TICKETS!

Saturday after Thanksgiving is the annual Condors Teddy Bear Toss, against the Stockton Thunder at 7 p.m., sponsored by 29 Eyewitness News, KERN 1180 AM and Three-Way Chevrolet-Cadillac. Fans are asked to bring a teddy bear to the game and when the Condors score their first goal of the night, throw them onto the ice.

(Note: this game is the largest crowd of the season, every year, and fans are encouraged to purchase their tickets in advance and arrive early to avoid being stuck in line when the Teddy Bear Toss goal is scored.)

Save up to 40% off your tickets to Teddy Bear Toss with the purchase of a mini-plan. If you attend a handful of games, this is the most cost effective way to do it.

I read the mailbag regarding the intro video…
Scroll to top