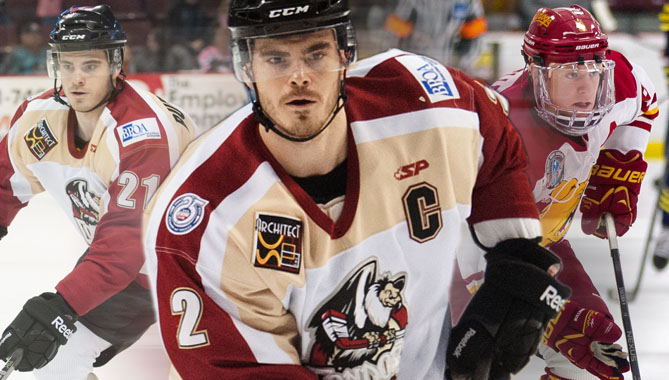 “Erik is a guy we wanted to bring back, 100 percent,” Mann said. “It’s our job this season to make sure he gets an opportunity to succeed and get a legitimate shot at the American Hockey League level. I’m looking forward to seeing Greg play. He’s in great shape, and we expect him to play a physical, power forward style of game. Travis was a consistent player in his college career who can play in different situations for us this season.”

Erik, 24, is fifth all-time among defensemen (10th overall) in games

played in Bakersfield with a career total of 202 in 3+ seasons with the Condors. The East Setauket, New York native has been a staple on the Condors blue line in each of the past three seasons, is used consistently in all situations, and served as both an alternate and captain during his time with the Condors. He was named the 12th captain in Condors history in January 2013. After back-to-back seasons in which he registered 16 points, Burgdoerfer played in all but one game last season en route to putting up 21 points (4g-17a).

“The new coaching staff and the team they are putting together with the addition of an affiliation made Bakersfield an ideal place to play,” Erik said. “The fans are great and certainly our goals will be making the playoffs and putting a winning product on the ice. It (playing with my brother) was our dream growing up and we’re living it.”

The forward half of the Burgdoerfer twins, Greg joined the Condors

late in 2012-13 after completing a four-year career at RPI. He enjoyed success though in his brief time in Bakersfield, scoring twice in three games. His best night came in Las Vegas on March 29, 2013 as he potted two goals, one shorthanded, and registered a plus-3 (+3) rating.

As an Engineer, Greg played 90 games over three seasons after transferring from the Air Force Academy. He scored nine times and assisted on nine others for 18 points.

“I had a good experience last year and with the new staff in place, I’ve only heard better things,” Greg said. “Bakersfield is a good place to play with the direction the team is going in. I’m here to win, play a physical game, and develop offensively.”

Ouellette (o-LETT), 24, joins the Condors after a four-year career at

Ferris State University. He comes off his best season in 2012-13 when he finished second on the team in scoring with 26 points (11g-15a) in 35 games as a senior. In his junior campaign, the Windsor, Ontario native helped lead the Bulldogs to the NCAA Frozen Four Championship Game. For his career, the 5’9″, 170 lbs. center played 147 games with 37 goals and 45 assists for 82 points.

During this summer, Ouellette played for the Adelaide Adrenaline in the Australian Ice Hockey League, scoring 13 goals and assisting on 11 for 24 points in just 12 games.

“When I talked with the coaching staff, I got a really good feeling about coming to Bakersfield,” Ouellette said. “I consider myself a playmaking, two-way center, and I hope to produce offensively.”

Best ways to use your season tickets, #2: Get to know key co-workers outside the office.