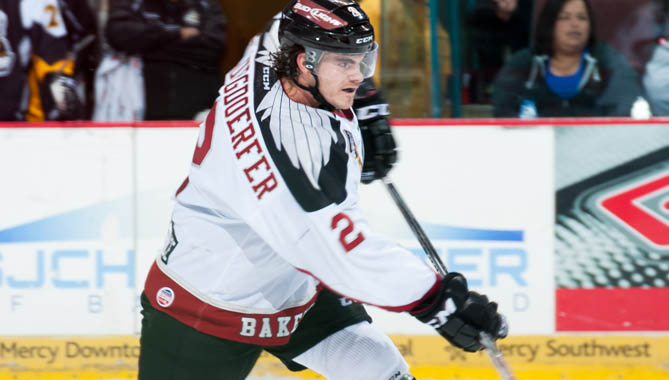 CONDORSTOWN, Calif. – The Bakersfield Condors, owned by the Edmonton Oilers, announced today that the rights to veteran D Erik Burgdoerfer have been traded to the Greenville Road Warriors to complete the future considerations portion of a deal in which the Condors acquired C Ryan Garlock.

“Burgy becomes an unrestricted free agent on Sept. 1 meaning that

he can choose where he wants to play regardless of who has his rights currently,” said Condors head coach Troy Mann. “I’ve told him that I would like him back next season, but as a veteran, it is up to him to decide his plans for next year.”

Veterans are defined as any player who has played 260 games or more in qualifying leagues. They become unrestricted free agents on September 1 even if they are qualified by a team, and are free to sign with any team in the ECHL at that point.

Burgdoerfer, 25, has played 269 games with Bakersfield in four-plus seasons, second most all-time for a defenseman in team history. He had career highs in goals (11) and points (22) to go along with a plus-15 mark in 2013-14. He earned his first American Hockey League (AHL) call-up to Oklahoma City in December and notched an assist in three games.

SAVE $$$$ WITH CONDORS TICKET PLANS
Condors ticket plans to the most affordable family fun in Bakersfield are on sale now. Huge savings on box office pricing, discounted parking, exclusive access to VIP events, early entry into all Condors games and much much more! Check out our mini-plans as well, with plans to fit every lifestyle. Click here or contact the team’s front office at 324-PUCK (7825)

Early bird pricing ends on June 30, with all ticket plan prices increasing on July 1. Act now and save!

Opening night is 123 days away on Oct. 17. Save money off opening weekend box office ticket pricing when you book a group for as few as 10 people. PLUS, suites are available, but will fill fast for opening weekend, and include the ALL-NEW Condors Legends Suite and Oilers Suite. Contact the team’s front office at 324-PUCK (7825) to book your group or suite TODAY!