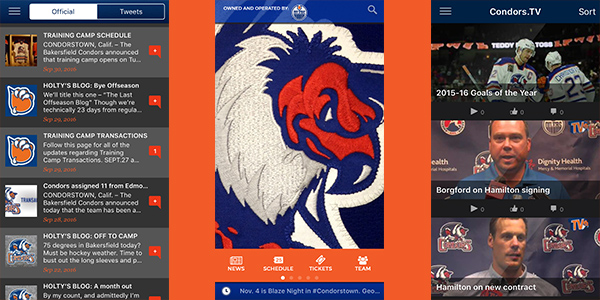 CONDORSTOWN, Calif. – The Bakersfield Condors announced today that the all-new official Condors team app is available as a free download in iTunes and Google Play.

OFFICIAL CONDORS TEAM APP POWERED BY iSPORTSMEDIA
**Be sure to allow push notifications when you download the app in order to receive timely ticket and merchandise specials as well as game updates**
CONDORS OPEN SEASON ON ROAD NEXT TUESDAY AND THURSDAY The Condors second AHL campaign and the 19th season of Bakersfield Condors hockey gets underway next Tuesday, Oct. 18 at 5 p.m. on the road against the Manitoba Moose. Catch all the action on the home of Condors hockey, Fox Sports 970 AM, online at FoxSports970AM.com, or thru the iHeartRadio app. Watch all Condors action when the team is on the road thru AHL Live with early-bird package pricing now available.

CONDORS HOME OPENER IS SATURDAY, OCT 22 @ 6 P.M. Bakersfield plays on home ice for the first time, Saturday, Oct. 22 at 6 p.m. The first 5,000 fans will receive a Condors Retro Cap presented by Eyewitness News, 98.5 The Fox, and Rabobank. It will be the team’s first look at the newest member of the Pacific Division, the Tucson Roadrunners.