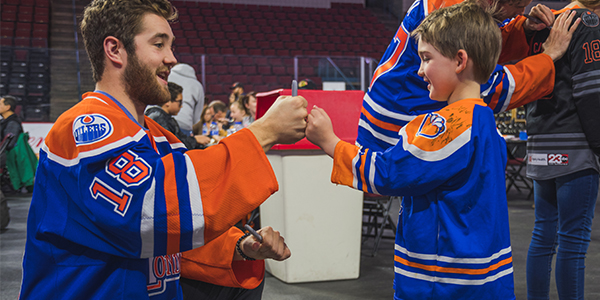 JERSEY AUCTIONS
The Condors jersey auctions this season raised over $108,000 for various charities such as the Kern County Cancer Fund, the Active 20/30 Club and the Kern County Burn Survivors Trust.
The all-time total for jersey auctions in team history surpassed $1.2 million. The team donned Star Wars, 20th Anniversary, Firefighters, Vietnam Veterans and Blackout Cancer themed jerseys during the course of the season.

TEDDY BEAR TOSS
It’s the biggest night of the season in Condorstown, and a sellout crowd did not disappoint, throwing a team record 10,549 stuffed animals onto the ice after Brad Malone’s second period tally.
This event has brought in over 121,000 stuffed animals over it’s history. Pencil it in right now for the Saturday of Thanksgiving weekend, and make sure you don’t miss out on this unique and memorable experience!

TICKETS FOR KIDS
Every kid enjoys a Condors game, but not every kid or their family has the means to come out very often. The Big Buddies and Coach’s Kids sponsored by The Duffel Family programs donated over $25,000 worth of tickets to help put an extra smile on kids faces last season.

NON-PROFIT AWARENESS PROGRAM
This program was brand-new in 2017-18, and gave 20 local charities a platform for awareness at the games, exposure through the Condors social media channels, and extra cash. Over $60,000 was given back to these non-profits over the course of the season, and this program will continue in 2018-19.

FAN FUNDRAISING
Choirs performing the anthem, dance groupson the ice during intermission and ticket fundraisers are just a few of the opportunities that you can bring in cash for your school or non-profit organization.
All together, teams, bands, choirs and groups raised more than $60,000 through working with the Condors.

50/50 RAFFLE & JERSEY RAFFLE TABLE
Sometimes fans can take home great prizes of their own, while helping local charities. TheJersey Raffle Table and 50/50 Raffle raisedover $70,000, while also sending fans home with game-worn Condors jerseys and pockets full of cash!
The 50/50 is held each home game, and the winner takes half the pot, while the rest goes to the Condors Community Foundation.

SPECIAL EVENTS
Unique events, such as the Tip A Condor Dinner (held at The Padre Hotel), and theCondors Golf Tournament (at Rio Bravo CC), gave fans special access to the players while raising money for local charities like the Kern County Shrine Club, as well as the Condors Community Foundation.
Nearly $9,000 was raised through special events.