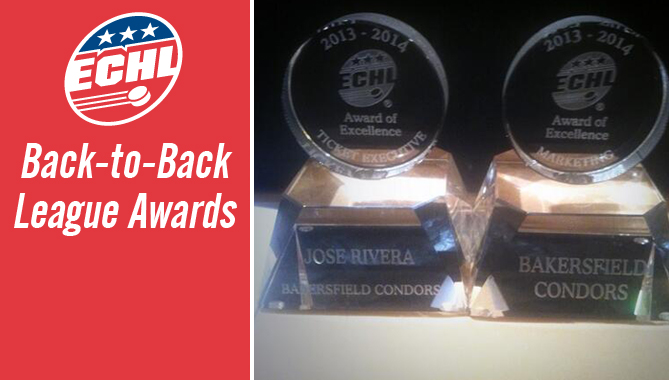 CONDORSTOWN, Calif. – The Bakersfield Condors, owned by the Edmonton Oilers, announced today that the team won three awards at the 2014 ECHL Sales, Marketing, & Communications Meetings held in Las Vegas last week. Vice President of Ticket Sales Jose Rivera won the league’s Ticket Executive of the Year Award while the team won the Award of Excellence in Marketing.
WATCH: Team accepts both awards
Earlier, Team President Matthew Riley won the Executive of the Year award. The three awards bring the organization’s total to 15, most in the ECHL. The Condors were also finalists for the Overall Award of Excellence, Broadcaster of the Year (Ryan Holt) and Website of the Year.
TICKET EXECUTIVE OF THE YEAR
Rivera has been a part of the Condors’ ticket staff for 15 years,

received the award presented to an individual who has experienced success with the ticket sales process.
He reached 103 percent of his season-ticket revenue goal in 2013-14 and played an integral role in helping the sales staff reach a new team record in group ticket sales. In addition, he was the project lead on the team’s new ticket portal which allows fans to purchase group and season tickets online.
AWARD OF EXCELLECE: MARKETING
Bakersfield won the Award of Excellence in Marketing for the third time (2008, 2010) which recognizes the ECHL team that executes a well-rounded marketing, sponsorship, and advertising campaign with consideration given to sponsorship sales, advertising, marketing campaign, and promotions.
The Condors received national and international media attention during the season courtesy of unique promotions such as Gettysburg Address Jersey Night, Undie Sunday, and Cemetery Plot Giveaway Night.
Bakersfield saw a 73% increase in Facebook likes and a 50% increase in Twitter followers on social media, continuing to expand their digital efforts. Along with that, the team partnered with The Bakersfield Californian to produce “Condors UNLEASED,” a groundbreaking live-streamed video show which averaged 500 viewers per episode.
BUY TICKETS BEFORE PRICES GO UP ON JUNE 30
Condors ticket plans to the most affordable family fun in Bakersfield are on sale now. Huge savings on box office pricing, discounted parking, exclusive access to VIP events, early entry into all Condors games and much much more! Check out our mini-plans as well, with plans to fit every lifestyle. Click here or contact the team’s front office at 324-PUCK (7825)
Early bird pricing ends on June 30, with all ticket plan prices increasing on July 1. Act now and save before prices go up!
WELCOME BACK SPECIAL
Any past Condors season ticket holder who did not have a ticket plan in 2013-14, now is your time to jump back on board. Purchase a full season ticket plan and receive 50 tickets to Opening Night on Friday, Oct. 17. If mini-plans are your thing, purchase any Condors mini-plan for the upcoming season and receive 20 tickets to Opening Night! Call 324-PUCK (7825) and welcome back, we missed you!
OPENING WEEKEND GROUPS AND SUITES!!!!
Opening night is 115 days away on Oct. 17. Save money off opening weekend box office ticket pricing when you book a group for as few as 10 people. PLUS, suites are available, but will fill fast for opening weekend, and include the ALL-NEW Condors Legends Suite and Oilers Suite. Contact the team’s front office at 324-PUCK (7825) to book your group or suite TODAY!