PRINCETON, N.J. – The ECHL and its member teams mourn the loss and express their condolences to the family and friends of former ECHL player Vlad Serov, who passed away unexpectedly on Sept. 5 at the age of 34. 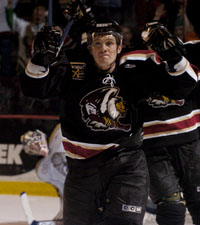 During the 2004-05 season, Serov finished fourth on the team in goals (19) and points (46), and was a key member of a Condors squad that won 40 games and racked up 90 points in the standings. Ten of his goals came on the power play, and six served as game winners. He also had a hat trick on Feb. 12, 2005, scoring a memorable overtime tally that sealed a 4-0 comeback victory against Long Beach.

Serov leaves behind his wife, Yelyzaveta, and two young daughters, Lukiya and Agniya, in Kiev, Ukraine.

Fans and friends who knew Serov, and would like to make a contribution to Serov’s family, can mail a check or money order to the ECHL Office at the address below. The ECHL will collect all donations and send to Serov’s family to aid them during this difficult time.