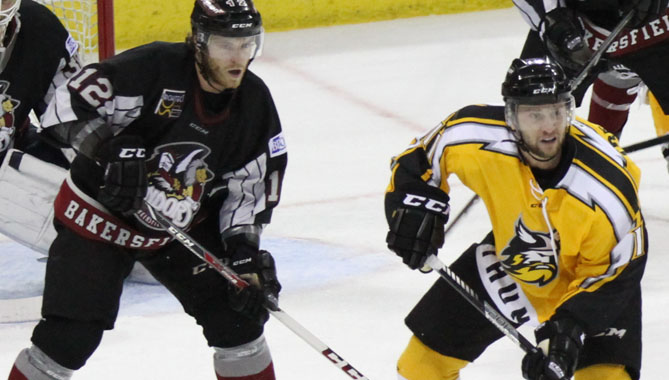 STOCKTON, Calif. – The Bakersfield Condors, owned by the Edmonton Oilers, led after the first period on the road, but fell, 6-2, to the Stockton Thunder on Wednesday night at Stockton Arena. Despite the loss, the Condors still lead the series, 2 games to 1 with Game 4 on tap for Friday night in Stockton.
**Watch Game 4 on the jumbotron at Rabobank Arena on Friday. Doors open at 6:30; admission is the donation of two non-perishable food items for charity. Some concessions available with puck drop slated for 7:30 p.m.
Box Score
1st Period

at the top of the crease and beat him on the backhand. Assists: Knackstedt, MacNeil; Time of goal: 18:28; Condors lead, 1-0
2nd Period

Followon TwitterSubscribeto RSS Feed
Just wondering if there were any suspensions for the brawl after the game S...