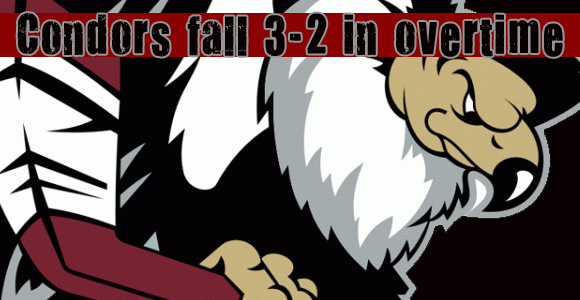 An entertaining first period of action led to two goals scored on one Condors power play, with the Wranglers scoring shorthanded and Bakersfield netting a power-play tally. At 17:12, Wranglers F Eric Lampe collected a loose puck at his defensive blue line and skated length of the ice before beating Condors G Bryan Pitton with a high shot. The shorthanded goal gave Las Vegas a 1-0 lead. Bakersfield responded immediately on the same power play with LW Jesse Gimblett banging home a crisp pass from behind the net by C Mathew Sisca just 81 seconds later to tie the game at 1-1. The score remained that way through twenty minutes of play with the Condors outshooting Las Vegas, 18-12.

Las Vegas regained the lead at 2-1, 3:55 into the second period, when F Adam Miller poked the puck through Pitton. However, with both teams down a man in a four-on-four situation, Condors D Matt Campanale scored his first professional goal to tie the game, 2-2, at the 10:09 mark, with a shot from the point that beat Wranglers G Mitch O’Keefe. Sisca and RW Scott Freeman collected the assists. Shots favored Las Vegas, 10-8 in the frame.

Both teams had near-misses in the third period while the clubs battled for the go-ahead goal. The Condors nearly took the lead with just over a minute left when LW Matt Marquardt rang a shot off the post. Shots were 12-6 Vegas in the third stanza, and 35-32 overall as the game headed to overtime.

In the extra session, the Wranglers went on the power play after a roughing penalty was called against Campanale with less than two minutes remaining. Right off the ensuing face off, Lampe jumped on a loose puck and snuck a backhander under Pitton for the game winner.

Condors Droppings:
Las Vegas Head Coach Ryan Mougenel was an assistant coach in both Fresno and Stockton, when Condors Head Coach Matt O’Dette was a player under him… For the second straight game the Condors had a goal disallowed due to a play being blow dead… tonight’s game was the first OT game of the season for Bakersfield… Power plays: BAK – 1/3; LV – 1/2… Three Stars: 1. Lampe (LV); 2. O’Keefe (LV); 3. Gimblett (BAK).

Get Tickets:
The team returns home on Friday, October 28th when the Idaho Steelheads come to Bakersfield for the first time. The most famous fans in hockey, ‘The Green Men’ will make an appearance and everyone in attendance will receive a Condors magnet schedule courtesy of Fox Sports 970 am and Bakersfield Hyundai. Saturday night is Star Wars Night, sponsored by ABC23 and KERN 1180 AM.

Ticket packages for the 2011-12 season are now on sale, starting at just $48. Call the front office at 324-PUCK for more information!