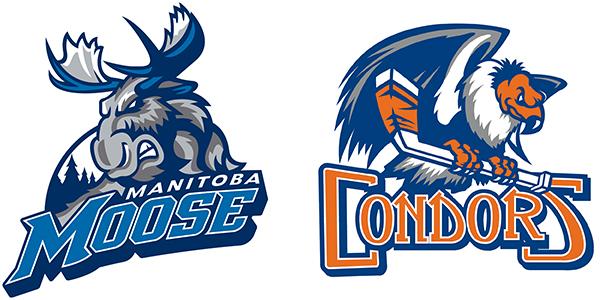 TOMORROW
The Bakersfield Condors welcome the Manitoba Moose to Bakersfield for game six of an eight-game home stand. On the season, Bakersfield is 1-1-0-0 against Manitoba after splitting the opening series of the season in Winnipeg back in October. All-time, the Condors are 2-0-0-0 on home ice against the Moose and are 4-2-0-0 overall. Manitoba is the AHL affiliate of the Winnipeg Jets.

IN CASE YOU MISSED IT
Bakersfield knocked off the AHL-leading Tucson Roadrunners on Saturday night in overtime, 3-2. C Josh Currie scored the game-winner and RW Taylor Beck had three points (2g-1a). D Joey LaLeggia also had a multi-point night with two assists. G Laurent Brossoit earned his second win of the season with 35 saves in the victory.

Manitoba is in the midst of a six-game road trip which began in San Diego. After a 3-2 Gulls win on Friday night, Manitoba fell behind 3-1 on Saturday and could not find a way back in a 6-3 loss. C Chase De Leo, who was recalled by the Jets earlier this week, had two goals and G Ondrej Pavelec took the loss, stopping 28 of 34.

BECK PICKS UP WHERE HE LEFT OFF
The CCM / AHL Player of the Week from the week prior, RW Taylor Beck arrived back in Bakersfield just in time to post three points (2g-1a) in the team’s 3-2 win over Tucson. This came on the heels of a career-high, four-point performance in his previous game, giving him seven points (3g-4a) over the two game stretch. His five-game point streak has featured 12 points (5g-7a) and he is t-4th in the AHL in scoring with 15 points thru nine games.

CONDORS LENGTHY HOME STAND
The Condors are 3-2 on a current, season-long, eight-game home stand. After today, the Condors host Stockton on Saturday and San Jose on Tuesday to conclude the stretch. It’s also a stretch of 13 of 15 games on home ice for Bakersfield extending thru December 10.

CONDORS NOTES
Two of the three top point-per-game players in the AHL are Condors. C Jujhar Khaira is averaging 1.75 Pt/G thru four games and RW Taylor Beck has averaged 1.67 thru nine… G Laurent Brossoit is t-8th in the AHL in save percentage at .929… C Josh Currie’s overtime goal was the first in the Condors AHL history. Bakersfield had been 0-7 in games decided by overtime previously… Beck has multi-point games in four of the nine he has played in, including two, three-point outputs and one four-point game.

MOOSE NOTES
Manitoba has won their last five home games, but have dropped their last four road games… The Moose leading scorer is C Jack Roslovic, a 19-year old who was drafted in the first round (#25 overall) by Winnipeg in the 2015 NHL Draft… LW Kale Kessy, who spent the past three seasons in the Oilers organization, was signed to a PTO by the Moose last week and made his team debut in San Diego last weekend.

FUNNEST 3-PACK EVER – PUBLIC CAN BUY OUTDOOR CLASSIC TICKETS NOW!
Youth Jersey $5 Frenzy, Teddy Bear Toss, and the Three-Way Chevrolet Condorstown Outdoor Classic pres. by Mission Bank all for just $56? The Funnest 3-Pack Ever is the only way to get the best seats to three of the biggest games of the year!
Get this deal now and book your seat for three HUGE games this season. Call 324-PUCK (7825) orclick here for more information.
https://www.bakersfieldcondors.com/wp-content/uploads/2016/11/Moose_Preview.jpg 300 600 condors /wp-content/uploads/2022/08/WebSite-Top-Bar-1.png condors2016-11-15 15:48:222016-11-15 15:48:22Condors Field Trip Day Preview