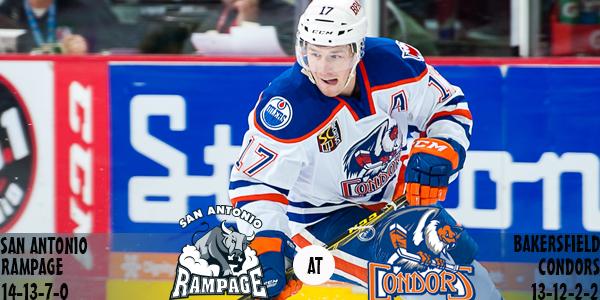 TONIGHT
The Bakersfield Condors welcome the San Antonio Rampage to Bakersfield for the first time. Bakersfield and San Antonio will clash six times this season and five times over the next two months. The Condors are 4-0-0-1 in their last five home games and own an 8-4-0-1 record at home in 2015-16.

IN CASE YOU MISSED IT
RW Zack Kassian scored his first goal as a Condor, but Bakersfield saw their four-game point streak end in Stockton, 3-1, on Sunday. G Laurent Brossoit turned aside a season-high 45 shots in the loss.

San Antonio was swept on home ice by San Diego last weekend, dropping decisions of 3-1 and 4-3. In their game on Sunday, the Rampage held a 3-0 lead and were up 3-2 heading to the third, but could not close out the Gulls. D Chris Bigras picked up a goal and an assist in Sunday’s loss.

CHANGIN’
There were 11 changes to American Hockey League memberships in the 2015 offseason. In addition to five teams relocating to California and a sixth relocating to Manitoba, five teams underwent affiliation changes. San Antonio was one of those teams swapping the Florida Panthers for the Colorado Avalanche. The Rampage were eliminated in the first round of the Calder Cup Playoffs a season ago by the Oklahoma City Barons.

ALL STARS
D Brad Hunt, currently on recall in Edmonton, and G Laurent Brossoit were each named to the 2016 AHL All-Star Classic in Syracuse, NY, Jan. 31 – Feb. 1. Hunt led the Condors in scoring before heading to Edmonton. It is his third selection to the AHL All-Star Classic. Brossoit was selected for the first time. He is currently fifth in the AHL with a .928 save percentage and is coming off a 45-save performance on Sunday.

CONDORS NOTES
C Jujhar Khaira was assigned by Edmonton yesterday. In his first stint in the NHL, Khaira had two assists in 12 games and seven penalty minutes. He earned his first NHL fighting major against Brenden Dillon of San Jose… RW Matthew Ford is on a seven-game point streak (6g-5a). He has a point all but one of his last 11 games (9g-6a). He is second in the AHL in goals scored with 15 despite playing in nine fewer games that the leader Petr Straka who has 17 goals on the campaign… The Condors have outscored opponents 22-13 on home ice during their current 4-0-0-1 streak.

RAMPAGE NOTES
San Antonio is 10-4-4-0 on the road this season. Their 24 points collected away from home is tied for third in the AHL… The Rampage will be without F Mikko Rantanen tonight. Rantanen won a World Junior Championships Gold Medal earlier this week with Finland and was named to the AHL All-Star Team yesterday. He is tied for the team lead in scoring with 26 points (10g-16a)… The Rampage are 3-10-1-0 in their last 14 games. They began the season 5-0-1 and have been to overtime/shootout 10 times, t-4th in the AHL. Their seven overtime losses are the most in the league.