Blog - Latest News
CONDORSTOWN – The Bakersfield Condors announced today that C Jujhar Khaira has been assigned to the team by the Edmonton Oilers (NHL). Bakersfield is home for two games this weekend, Friday and Saturday at 7 p.m. 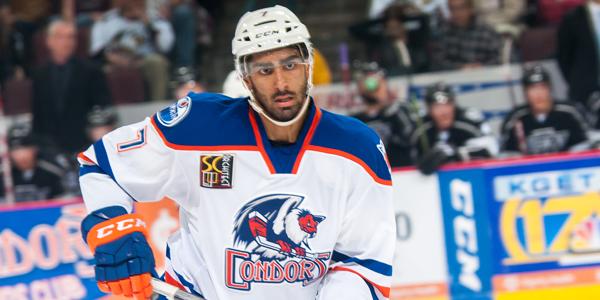 KHAIRA – 21 years old, Surrey, British Columbia, stats
MMA NIGHT WITH COWBOY CERRONE & STAR WARS NIGHT THIS WEEKEND!
The Condors are home for two games this weekend, Fri. January 8 and Sat. January 9. Friday night, meet MMA Superstar Donald “Cowboy” Cerrone and get your picture with him in the photo booth presented by 106.1 KRAB Radio. Then. the 501st Legion invades Condorstown on Saturday for Star Wars Night with characters from the movies available in the photo booth and on the concourse presented by My 45 and 106.1 KRAB Radio.
POKER TOURNAMENT WITH THE CONDORS, JAN. 12
Join the Condors at Golden West Casino for a charity poker tournament, coming up on Tuesday, Jan. 12. For just $65, participants get a prime rib/chicken dinner, pre-tournament mixer and each of the 10 tables will have a Condors player/representative. Cash prizes will be awarded, plus bounties for knocking out a Condor! The tournament will benefit the Condors Foundation, a 501(c)3, so your entry fee is also tax deductible.
https://www.bakersfieldcondors.com/wp-content/uploads/2016/01/Khaira300-.jpg 300 600 condors /wp-content/uploads/2022/08/WebSite-Top-Bar-1.png condors2016-01-07 16:37:052016-01-07 16:37:05Khaira assigned to Bakersfield