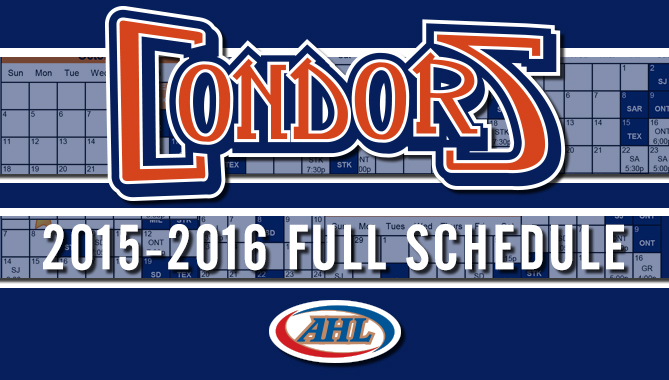 CONDORSTOWN, Calif. – The Bakersfield Condors, owned by the Edmonton Oilers, revealed their 2015-16 American Hockey League (AHL) schedule which begins October 9 and 10 on Dignity Health Home Ice at Rabobank Arena. Bakersfield will play 68 games against nine teams.
DOWNLOAD: Printable Schedule | Infographic below
IMPORT SCHEDULE TO YOUR FAVORITE CALENDAR: Click here | Instructions
“Condorstown can now start circling their calendars to plan when they’ll be having fun this year,” said Condors Team President Matthew Riley. “We want to thank the AHL, AEG, and Rabobank Arena for working with us to ensure that we have a very family friendly schedule. Fans will get to see new teams mixed with some familiar rivals which should make the inaugural season in the AHL the best year of Condors hockey yet!” 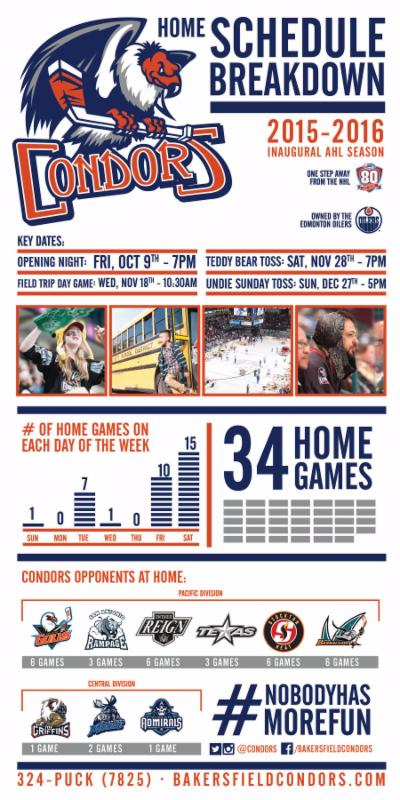 CONDORS LONE HOME PRESEASON GAME – SATURDAY, OCT. 3
Get the first look of the blue and orange at Rabobank Arena when the Condors take on new California foe, San Jose, in a preseason matchup in Condorstown. Tickets are just $10 for lower level and $5 for upper level. Get the preseason for FREE by signing up for a full or half ticket membership. Call 324-PUCK (7825) or crash the net.
BE A PART OF HISTORY – JUST 43 DAYS TILL OPENING NIGHT!
Join the Condors on their historic move to the American Hockey League in 2015-16. Become a ticket member and enjoy all of the great benefits by contacting the Condors at 324-PUCK (7825) orclick here for more information.
NHL PRESEASON GAME IN BAKERSFIELD – MONDAY, SEPT. 21
The Arizona Coyotes and Los Angeles Kings will play an NHL preseason game at Rabobank Arena on Monday, Sept. 21 at 7 p.m. Tickets are on sale now at the Rabobank Arena box office or online by clicking here.
COME WORK FOR US – JOB FAIR AND ANTHEM TRYOUTS – TUESDAY, SEPT. 1
Ever wanted to be the mascot? Sell merchandise? Ride a golf cart on the ice and fire t-shirts out of cannons? Sing the National Anthem in front of thousands? Now’s your chance (if you’re at least 15 1/2 years old)! Interviews will take place on Tuesday, Sept. 1 inside the Convention Center at Rabobank Arena from 3-5:30 p.m. Come speed up the process by picking up and filling out an application in our office (open Monday-Friday 8:30 – 5 p.m.).
https://www.bakersfieldcondors.com/wp-content/uploads/2015/08/2015_08_26_fullschedule.jpg 380 669 condors /wp-content/uploads/2022/08/WebSite-Top-Bar-1.png condors2015-08-27 10:00:322015-08-27 11:21:17Condors inaugural schedule revealed