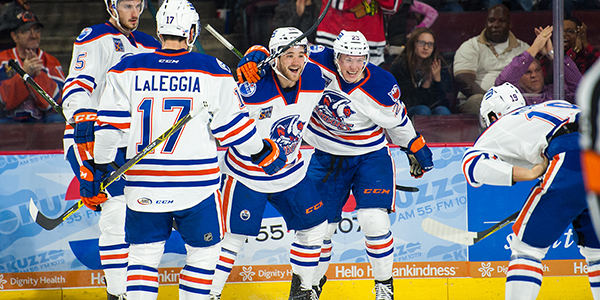 CONDORSTOWN, Calif. – The Bakersfield Condors (3-3-0, .500) received goals from six different players en route to a 7-1 thrashing of the San Antonio Rampage (3-6-0-0, .333) Wednesday night at Rabobank Arena. RW Taylor Beck led the way with a pair of goals and an assist, and it was the largest margin of victory for the Condors in their AHL history.

PET AWARENESS NIGHT AND TEAM POSTER GIVEAWAY THIS WEEKEND The Condors are home for two games this weekend. Friday night, the team will host Pet Awareness Night and Blaze Night. The first 1,000 fans, 12 and under, will receive a Secret Life of Pets plush toy, plus enter to win a Condors player-designed custom pet bowl, all to benefit SPCA. Wear any Bakersfield Blaze gear and receive a two-for-one ticket deal presented by 106.1 KRAB Radio, TNG Energy, and SPCA.
Saturday night is Team Poster Giveaway Night. Everyone in attendance will take home a Condors team poster. Plus stick around after the game for a members-only meet the team party in the club room. Sponsored by The Bull 97.3 and My45.