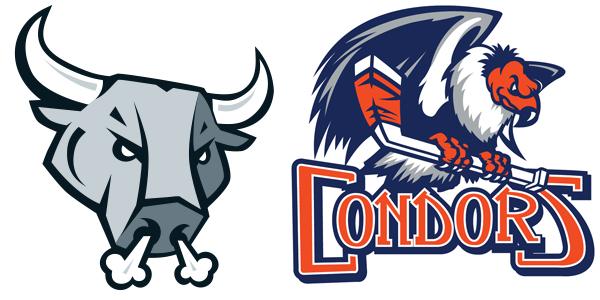 TONIGHT
The Bakersfield Condors host the San Antonio Rampage for the first of four meetings on the season. It is the first of eight straight home games for the Condors who play 13 of their next 15 games in Bakersfield. Last season, the Condors went 1-4-1-0 against the Rampage, but were 1-1-1 on home ice against San Antonio.
IN CASE YOU MISSED IT
Bakersfield earned a split in San Jose over the weekend, bouncing back with a 4-3 shootout win on Saturday after suffering their first shutout of the season on Friday, 4-0. G Nick Ellis got the win in net on Saturday, stopping 41 of 44 shots in regulation/overtime and then all three shootout attempts. C Jujhar Khaira returned to the lineup and scored his fourth goal in three games.
San Antonio fell to the Ontario Reign on Sunday at home, 4-2. RW Mike Sislo and D Sam Jardine scored the goals for the Rampage while G Spencer Martin made 27 stops in the loss.
A LOOK AT THE HOMESTAND
The Condors play their next eight games at home featuring six different Pacific Division foes. The only team in the division the Condors do not face during the homestand is the Ontario Reign. 13 of the next 15 games for the Condors are in Bakersfield before the team hits the road for five straight beginning on Dec. 10. Last season, the Condors were 17-13-1-1 on home ice.
CONDORS NOTES
C Jujhar Khaira has a point in every game he has played in this season (3 GP, 4g-1a-5pts). His three-game goal streak (4g) is tied for the AHL lead currently… RW Taylor Beck fired 10 shots on Saturday, an AHL team record for shots on goal. Bakersfield’s 40 shots on net as a team was a season high… D Frankie Simonelli was recalled from Nofolk (ECHL) yesterday. He had two assists in seven games with the Admirals…
RAMPAGE NOTES
San Antonio is 3-0 on the road this season. Conversely, the Rampage are 0-5 at home… The team is led by first-year head coach Eric Veilleux. Veilleux coached the Norfolk Admirals (ECHL), affiliate of the Condors and Oilers, a season ago… G Spencer Martin is 13th in the AHL with a 1.98 goals-against average… He is fourth in minutes played with 334… LW AJ Greer is tied for the AHL rookie lead in scoring with 8 points (2g-6a). The 19-year old had 27 points (16g-11a) in 33 games with Rouyn-Noranda… San Antonio has the second best penalty kill in the AHL at 90.2% (37/41).
TRANSACTIONS
Nov. 11 – D Frankie Simonelli recalled from Norfolk (ECHL)
Nov. 11 – RW Jaedon Descheneau assigned to Norfolk (ECHL)
FUNNEST 3-PACK EVER – PUBLIC CAN BUY OUTDOOR CLASSIC TICKETS NOW!
Youth Jersey $5 Frenzy, Teddy Bear Toss, and the Three-Way Chevrolet Condorstown Outdoor Classic pres. by Mission Bank all for just $56? The Funnest 3-Pack Ever is the only way to get the best seats to three of the biggest games of the year!
Get this deal now and book your seat for three HUGE games this season. Call 324-PUCK (7825) orclick here for more information.
https://www.bakersfieldcondors.com/wp-content/uploads/2016/11/Rampage_Preview.jpg 300 600 condors /_media/logo_1819.png condors2016-11-02 13:14:002016-11-02 13:14:00GAME PREVIEW: Condors v San Antonio