CONDORSTOWN, Calif. – The Bakersfield Condors are proud to announce that RW Matthew Ford has been named the Condors’ winner of the IOA/American Specialty AHL Man of the Year award for his outstanding contributions to the Condorstown community during the 2015-16 season. 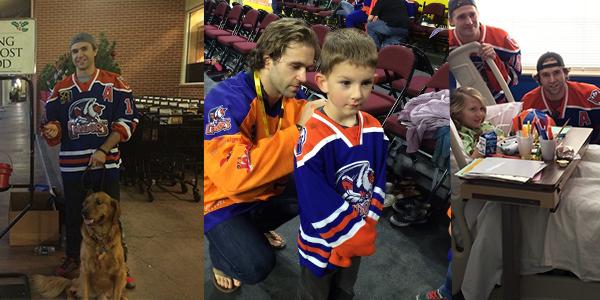 FORD – a leader in the community

Ford is now one of 30 finalists for the AHL’s 2015-16 Yanick Dupre Memorial Award, honoring the overall IOA/American Specialty AHL Man of the Year. The league award is named after the former Hershey Bears forward and AHL All-Star who died in 1997 following a 16-month battle with leukemia. The winner of the Yanick Dupre Memorial Award will be announced by the American Hockey League at a later date.
Team Cards and Bobbleheads and Alumni Tournament – THIS WEEKEND!

The Condors return home this weekend for two big promotions. Friday, Apr. 1 against San Jose is Team Card Set Giveaway, sponsored by My 45 KiX 92.1 and Rabobank. The first 2,000 fans 5 and older get a set of cards from the team’s inaugural AHL campaign.