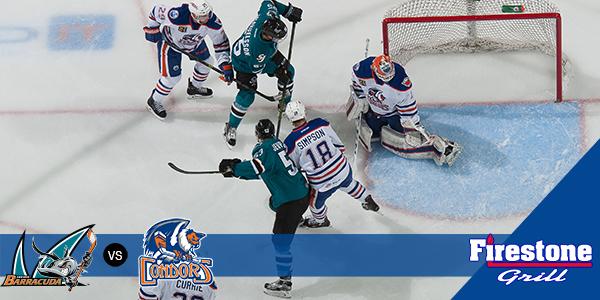 IN CASE YOU MISSED IT
Bakersfield has dropped three straight after being swept by the San Antonio Rampage and Texas Stars on the road. After being shutout in San Antonio on Saturday, the Condors fired 49 shots in a losing effort in Texas on Tuesday. LW Mitch Moroz had the lone goal for the Condors.

San Jose hopped back into a playoff spot with a 3-1 win on home ice on Wednesday night against Ontario. D Gus Young had two assists and was +3 in the win as three different scorers found the back of the net. G Aaron Dell stopped 35 of 36 shots for his team-leading 15th win of the season.

PLAYOFF PICTURE
With eight games remaining in the 2015-16 regular season, the Condors face a seemingly must-win game this evening. Bakersfield trails San Jose by six points, but do hold a game in hand on the Barracuda. Complicating matters, the Charlotte Checkers, at a .551 points percentage with eight games left, sit virtually five points in front of the Condors. The Checkers could crossover to be the four-seed in the Pacific Division if their points percentage is better than both Bakersfield and San Jose.

BENIK SIGNS ATO
F Joey Benik was signed to an amateur try-out earlier today. The 24-year old recently wrapped up his collegiate career at St. Cloud St. University. From Andover, Minn., Benik enjoyed his best season as a senior with 44 points (21g-23a) and was +29 in 38 games. He finished his tenure with the Huskies with 57g-65a-122pts in 134 games.

CONDORS NOTES
LW Mitch Moroz, C Kyle Platzer, and RW Kale Kessy were reinstered into the lineup on Tuesday and produced the team’s lone goal in the first period off a face-off. Moroz and C Jujhar Khaira each dropped the mitts on Tuesday for their team-leading 7th fights of the season. Bakersfield has 33 fighting majors… The 49 shots from Bakersfield was second-most fired by the team this sason (51, 1/26 v Manitoba)… Bakersfield is t-6th in shorthanded goals with 10, four of which have come against the Barracuda. The Condors have surrendered the third fewest shorthanded goals with four on the season.