The Bakersfield Condors play their final home game of the regular season. Bakersfield has won three straight overall and is 3-0 against San Diego in Bakersfield this season. A limited number of tickets are on sale at AXS.com and can be purchased by clicking the button below. Note with last night’s cancellation, should the game not be made up, Condors365 Members will receive credit. If you purchased a single-game ticket through AXS.com, your tickets will be refunded (please allow 7-10 days). 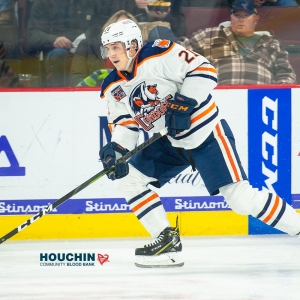 Win a Cameron Hebig game worn, signed jersey tonight for just $10 by purchasing raffle tickets at the button below thanks to Houchin Community Blood Bank. The winner will be picked during the second intermission of tonight’s game.

IN CASE YOU MISSED IT
Bakersfield won its third straight on Wednesday against Colorado, but due to COVID-19 Protocols affecting the Eagles, last night’s game was called off.

San Diego was swept in a home-and-home series with Ontario, dropping last night’s game, 7-4. Andrew Poturalski had a goal and assist for the Gulls.

The Condors can secure a top-2 seed in the upcoming Pacific Division playoffs with a regulation win tonight over San Diego. Currently, the team is a point up on Henderson for the top spot in the division, with both teams scheduled to play the same amount of games now with last night’s cancellation.

Cooper Marody scored his 21st of the season on Wednesday, continuing to pace all goal scorers in the AHL. He has scored in three straight games, including each of the last two game-winners for the club.