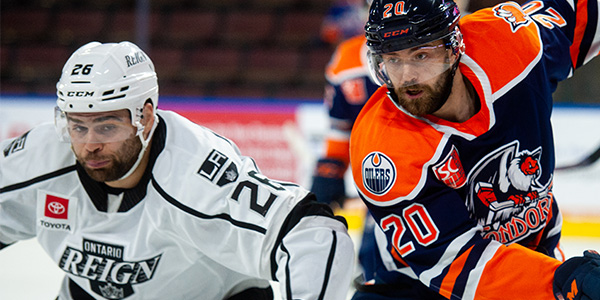 The Condors travel to Ontario to take on the Ontario Reign at 7 p.m. Friday night. Both teams are unbeaten in regulation to start the season with the Condors going 2-0-0 last weekend and the Reign starting 2-0-1 on the season.

Download the all-new Condors mobile app built by PCL Construction to vote for the PCL Hardest Worker of the Game. While you’re on the app, purchase your game worn jersey raffle tickets to win Sam Gagner or Matthew Benning jerseys at upcoming games. You do not need to be present at games to win. The app is available in the App Store or Google Play, just search Bakersfield Condors.

Bakersfield went 5-2-1 against the Reign a season ago. The Condors shut out San Jose, 1-0 on Sunday behind 34 saves from Stuart Skinner. Ontario tied Abbotsford late in regulation and Martin Frk’s overtime goal gave them a 4-3 win on Tuesday.

Seth Griffith had a four-point (1g-3a) weekend to start the season. His power-play goal on Sunday proved to be the game-winner.

The Condors 15 shots on Sunday were the fewest in the AHL era. It was Skinner’s fourth career AHL shutout.

Ryan McLeod, who had 28 points (14g-14a) in 28 games last season, and William Lagesson both joined the team from Edmonton this week. Skinner was recalled earlier in the week with Mike Smith on IR in Edmonton. The Condors have third round draft pick Ilya Konovalov and second round pick Olivier Rodrigue as their goaltending tandem.

Ontario has started 4/12 (33.3%) on the power play, while the Condors penalty kill, which led the league a year ago, is one of five perfect kills in the AHL to start the season (7/7).

After the game, head to Condors.TV for the Atlas Urgent Care Rapid Highlights.