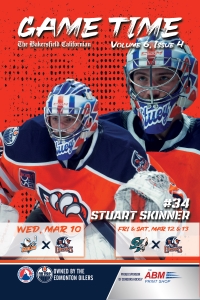 This edition features 10 questions with Janis Jaks as he dishes on his favorite Latvian food and just how many languages does he speak? 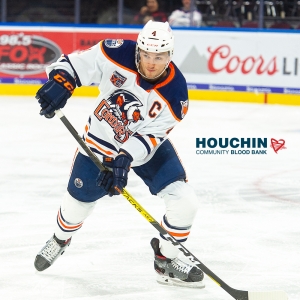 Tickets are just $10 with the winner drawn during the second intermission of tonight’s game and announced live on the broadcast.

TONIGHT
The Bakersfield Condors and San Diego meet for the fifth time on the season as the Condors look for back-to-back wins in the season series. It is game four of a busy month of March for the Condors which has the team playing 14 games in 27 days.

Bakersfield earned its fifth straight win on Sunday in El Segundo with a 5-1 victory over the Ontario Reign. C Cooper Marody had four points (2g-2a) en route to being named CCM / AHL Player of the Week. G Stuart Skinner stopped 26 of 27 for his fifth straight win between the pipes.
San Diego dropped a 4-2 decision on the road last night in San Jose. C Sam Carrick scored his fifth of the season to pull into a tie for the team lead and D Kodie Curran had his third on the campaign. Both goals came on the power play. G Lukas Dostal stopped 21 of 24 in the loss.

BENNY AND THE JETS

The line of Tyler Benson – Ryan McLeod – Cooper Marody has ignited the Condors offense lately. The three have combined for the last 10 goals scored by the Condors. Benson (4g-7a) and Marody (7g-4a) carry six-game point streaks into action tonight. McLeod has four goals in his last five games.

Marody enters the night third in the AHL in scoring with 13 points.

G Stuart Skinner is third in the AHL in goals-against average at 1.72. He is 6th in save percentage at .933. Over the past 128 shots faced, he has stopped 123 of them, allowing just five goals over the past five games.

D Yanni Kaldis has assists in three straight games… D Max Gildon has assists in two straight and is +5 through three games in Bakersfield… Marody sits on 97 points through 101 career games as a Condor… Bakersfield has scored the opening goal of the game in eight of their 10 this season… After being held 0/16 to start the season, the Condors power play is now five for its last 13 and up to 15th in the AHL… The team’s penalty kill has climbed to second in the AHL at 88.0% having allowed just three goals on 25 opportunities… Bakersfield leads the league in shots per game at 34.20.

3/9 – RW Tyler Tullio signed to an ATO by Bakersfield