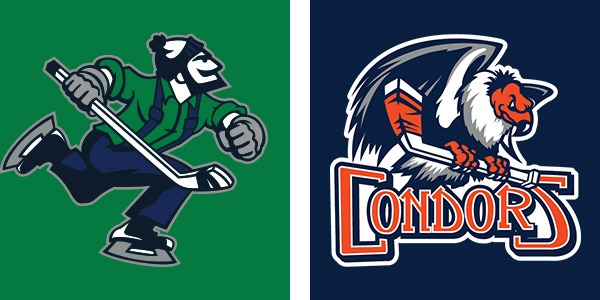 The Bakersfield Condors host the Abbotsford Canucks to open the 2021-22 regular season. It is the 24th season of Condors hockey and the seventh in the American Hockey League (AHL). All-time, the Condors are 14-8-1 in home openers, including a 4-2-0 mark in the AHL.

GETTING TO KNOW YOU
The Edmonton Oilers and Vancouver Canucks AHL affiliates have not met since the 2015 Calder Cup Playoffs when the Utica Comets defeated the Oklahoma City Barons in seven games. Bakersfield and Abbotsford will see each other eight times this season.

WELCOME BACK
Bakersfield’s opening night roster features 17 players who played for the team a season ago and a total of 19 who have played for the Condors previously. Four of the team’s six leading scorers return, led by Cooper Marody, who led the AHL in goals last season with 20. The two who do not return, Tyler Benson and Ryan McLeod, both made the opening night roster for the Edmonton Oilers.

MALONE IS CAPTAIN CONDOR
Brad Malone enters his fifth season overall in Bakersfield and his second as captain. He notched 21 points (10g-11a) in 26 games last season and added a series clinching overtime goal in the Pacific Division semifinals.

HOME ICE ADVANTAGE
The Condors went 14-4-1 (.763) on home ice a season ago, the best mark in the Pacific Division.

CONDORS NOTES
Jay Woodcroft returns for his fourth season behind the Bakersfield bench. During his tenure, the team has captured two division titles and advanced 10 players to the NHL… G Stuart Skinner led the AHL in victories last season, going 20-9-1… 20-year old d-man Philip Broberg will make his North American debut. He was drafted in the first round (8 overall) by Edmonton in 2019.

CANUCKS NOTES
Abbotsford is led by head coach Trent Cull who enters his fifth season as head coach of the Canucks AHL affiliate… Noah Juulsen, who was drafted in the 1st round (26 overall) in 2015 by Montreal, was recently assigned after being acquired from the Florida Panthers… 21-year old second round selection Jett Woo had five points (2g-3a) in 28 games with Utica last season and was +7… Michael DiPietro returns to the Canucks after going 3-1 with a 2.52 goals-against average and a .916 save percentage with the Comets a season ago.

NEXT UP: The Condors host San Jose on Sunday at 5 p.m.