The Bakersfield Condors host the Ontario Reign on Dignity Health Home Ice at Mechanics Bank Arena at 3 p.m. Yesterday, the Condors rallied from three goals down with 10 minutes left to win 8-6. Bakersfield has won the first three games of the eight-game season series. The Condors have won 10 of 11 games following yesterday’s third period comeback. 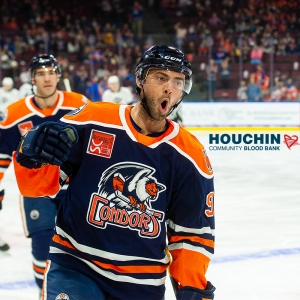 Purchase your Houchin Community Blood Bank jersey raffle tickets for just $10 at the button below. The winner will be announced during the third period today.

IN CASE YOU MISSED IT
Bakersfield erased a three-goal deficit with just over 10 minutes left in regulation and took an 8-6 win yesterday. Down 6-3, Blake Christensen scored twice in the third period, including the game-winner. Seth Griffith had three assists in the third period alone, on his way to four on the evening. Olivier Rodrigue stopped five shots in the third period in relief of Stuart Skinner and picked up his first AHL win.

Ontario looked well on their way to their fifth straight win yesterday after a four-goal second period staked them to a three-goal cushion heading to the third period. Sean Durzi had a goal and assist, Blaine Byron scored twice, and Lias Andersson assisted on a pair of goals.

Seth Griffith had four assists last night to match a Condors team record. Brad Hunt accomplished the feat twice in the 2015-16 season. Griffith, who led Manitoba in scoring each of the last two seasons, has nine points (2g-7a) in his last nine games.

Adam Cracknell has 11 points (5g-6a) in his last 12 games. His 52 shots paces the team… Tyler Benson leads the AHL in assists with 14… Cooper Marody has 20 points (12g-8a) on his AHL season-high, 12 game point streak… Blake Christensen’s goals were the first of his AHL career… The Condors surrendered a first period goal for the first time in 12 games yesterday.
REIGN NOTES
Ontario has scored 26 goals in its last five games… Arthur Kaliyev has six goals and two assists for eight points in his last five games… Quinton Byfield has goals in his last three and is on a four-game point streak (3g-1a). He was drafted second overal in the 2020 NHL Draft… Rasmus Kupari had an eight-game point streak end on Wednesday. He has 2g-8a over his last nine games.