The Bakersfield Condors host the Ontario Reign for the final game of an eight-game season series. Bakersfield is 5-1-0-1 in the opening seven games and has won the last two. On home ice, the Condors are 2-0-1 on the season against the Reign.

Bakersfield has won four straight including a sweep of the Henderson Silver Knights. Limited tickets are available online at AXS.com or by clicking the button below. Doors open at 4 p.m. 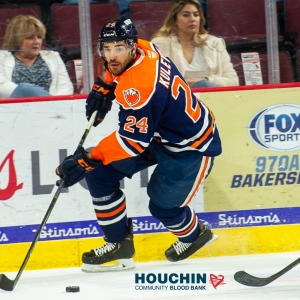 Purchase your Jake Kulevich jersey raffle tickets for just $10. Anyone, anywhere can win thanks to Houchin Community Blood Bank.

IN CASE YOU MISSED IT
Bakersfield extended a winning streak to four games on Thursday with a 4-1 victory in Las Vegas. The Condors became the first team to sweep Henderson on the season. Brad Malone scored in his 600th professional game. Bakersfield’s power play connected twice and Stuart Skinner stopped 18 of 19 for his league-leading 16th win of the season.

Ontario has been off since a 1-0 shutout loss to the Condors last Friday. J-F Berube took the loss despite stopping 21 of 22 as the Reign outshot the Condors 30-22.

Bakersfield has allowed just 12 goals over its last seven games. Six of the 12 goals against came in one loss to Colorado. Over the last four games, the Condors have only allowed three goals with one shutout.

FIVE AT THE TOP

The Condors have five players in the top 16 of the AHL scoring race. Cooper Marody and Tyler Benson are tied for second, Ryan McLeod is 5th, Adam Cracknell is t-11th, and Seth Griffith is t-16th.

Rookie d-man Max Gildon leads all first-year Condors in scoring with 12 points (2g-10a). Among first-year blueliners in the AHL, the Florida Panthers third round selection is t-5th in scoring. His +16 is the best for any d-man in the AHL.

The Condors are unbeaten in regulation in 13 straight at home (12-0-1). It’s the longest streak in the AHL this season and the longest in the team’s AHL history.