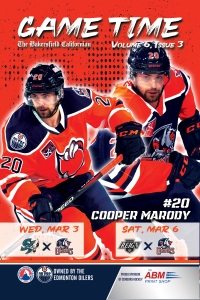 DOWNLOAD GAME TIME
SATURDAY
The Bakersfield Condors and Ontario meet for the first of eight times this season. It is the front end of a home-and-home series which concludes Sunday in El Segundo at 3 p.m.

Bakersfield returned from an 11-day layoff and picked up where they left off on Wednesday with a 6-0 win over San Jose. D Janis Jaks scored his first AHL goal in the first frame and that would prove to be all the Condors would need as G Stuart Skinner stopped all 22 for his second consecutive shutout.

Ontario fired 41 shots in a 5-4 overtime loss to the San Diego Gulls on Wednesday. Trailing 4-2 early in the third period, the Reign battled back to tie it at 4-4 on goals from Tyler Madden and Akil Thomas. G Troy Grosenick made his first start of the season for Ontario.

ESPOSITO POTS A PAIR
RW Luke Esposito scored twice on Wednesday to jump into the team lead in goals with four on the season. The fourth-year pro also leads the team in shots with 22.

GAMBARDELLA OUT TO A QUICK START

SOLID AT BOTH ENDS

The Condors have outscored the opposition 14-1 over their current three-game winning streak. G Stuart Skinner carries 149:18 of individual shutout time into action Saturday. That mark is second in the Condors AHL era to G Laurent Brossoit who went 152:02 in 2015-16.
CONDORS NOTES
Cooper Marody plays his 100th game with the Condors. He has 90 points (28g-62a) in his AHL career… The Condors power play is 3/8 over its last three games. The team’s penalty kill has killed off 11 straight power plays dating back to Feb. 13 against Henderson… G Stuart Skinner is 6th in goals-against average at 1.61… The Condors have opened the scoring in six of their eight games this season and are outscoring opponents 11-6 in the first period… Bakersfield is t-3rd in goals against per game at 2.38.
REIGN NOTES
Rookie Samuel Fagemo is t-7th among first-year players in scoring with seven points (4g-3a)… RW Arthur Kaliyev leads all rookies in shots with 32… The Reign have outscored opponents 8-7 in the first period this season, but have been outscored 35-18 in the second and third periods combined… Ontario is led by first-year head coach John Wroblewski who spent the past four seasons with the United States National Development Program. He is a former captain of the Fresno Falcons (ECHL).