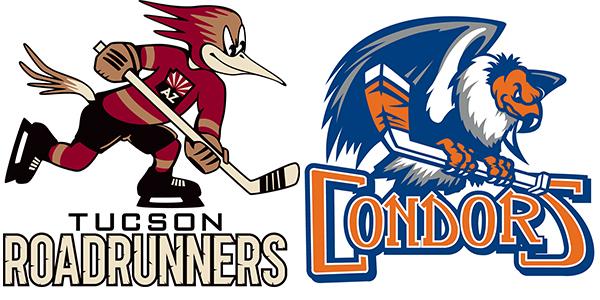 TONIGHT
The Bakersfield Condors wrap a weekend set against the Tucson Roadrunners tonight. Bakersfield is in the midst of an eight-game home stand which began on Nov. 2 and ends on Nov. 22. The Condors own a 2-2-0 record on the home stand. Tucson has won the first two of eight season matchups.
IN CASE YOU MISSED IT
Bakersfield was shut out last, 3-0, at the hands of the Roadrunners. G Nick Ellis made 35 saves on 37 shots.
Tucson continued their strong start to the season with a 3-0 win in Bakersfield last night. LW Brendan Perlini scored for the second time against the Condors and the fifth time this season. G Adin Hill earned the shut out, stopping all 17 shots fired his way.
BECK NAMED CCM / AHL PLAYER OF THE WEEK
RW Taylor Beck became the first Condors player in AHL team history to be named CCM / AHL Player of the Week on Monday. In three games last week, the St. Catherines, Ontario native had three goals and five assists for eight points as the team began the home stand 2-1-0. He was recalled on Sunday and played eight minutes in the Oilers win over Detroit.
RESPONDING ON SATURDAYS
The Condors have dropped three straight Friday games. In the previous two, the Condors fell 4-0 at San Jose and 3-1 at home to Texas. The following nights, Bakersfield rebounded for a 4-3 shootout win in San Jose and a 5-3 win last Saturday night against the Stars.
CONDORS NOTES
RW Taylor Beck became the 20th Condors player in AHL history to play in the NHL on Sunday. He is currently t-11th in the AHL in scoring with 12 points (3g-9a)… LW Ryan Hamilton (3g-4a) had a four-game point streak snapped last night. C Kris Newbury (3g-1a) had a three-game goal scoring streak snapped in the loss… The Condors were shut out for the second time this season… The 17 shots for was a season low for the Condors.
ROADRUNNERS NOTES
The Roadrunners are 7-0-1 in their last eight games and hold the top point percentage in the entire AHL… G Adin Hill recorded his first pro shutout last night. His goals-against average dropped from 3.11 to 2.67 in the process… C Chris Mueller had two assists a night ago. He led San Diego a year ago in scoring with 57 points in 60 games… LW Michael Bunting has a goal in five straight games…Tucson has outscored opponents 11-5 in third periods this season.
TRANSACTIONS
11/12 – RW Taylor Beck reassigned by Edmonton (NHL)
11/9 – D Bryce Aneloski signed to a PTO
11/9 – LW Kellan Lain signed to a PTO
11/6 – RW Taylor Beck recalled by Edmonton (NHL)
FUNNEST 3-PACK EVER – PUBLIC CAN BUY OUTDOOR CLASSIC TICKETS NOW!
Youth Jersey $5 Frenzy, Teddy Bear Toss, and the Three-Way Chevrolet Condorstown Outdoor Classic pres. by Mission Bank all for just $56? The Funnest 3-Pack Ever is the only way to get the best seats to three of the biggest games of the year!
Get this deal now and book your seat for three HUGE games this season. Call 324-PUCK (7825) orclick here for more information.
https://www.bakersfieldcondors.com/wp-content/uploads/2016/11/Tucson_Small.jpg 300 600 condors /wp-content/uploads/2022/08/WebSite-Top-Bar-1.png condors2016-11-12 11:51:462016-11-12 11:51:46GAME PREVIEW: Condors v Tucson (11/12)