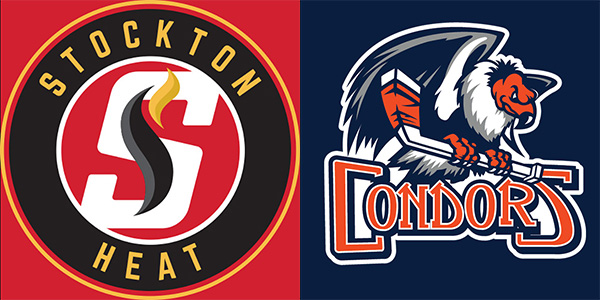 The Bakersfield Condors renew the Highway 99 rivalry with the Stockton Heat. It is the first of 10 matchups this season between the two sides who did not meet in 2020-21 as Stockton temporarily relocated to Calgary. The 2004-05 season was the last time teams from Bakersfield and Stockton did not play one another until last season.

GAME PREVIEW brought to you by Rodriguez & Associates
IN CASE YOU MISSED IT
Bakersfield suffered its first defeat of the season last night, 3-2 to Ontario. Seth Griffith scored on the power play for the second straight game and Ryan McLeod notched a goal in his return to Bakersfield. Ilya Konovalov made his first AHL start and stopped 25 of 28 in the loss.

Stockton remained unbeaten in regulation to start the year with a 6-2 win in San Diego last night. Jakob Pelletier had a goal and two assists to help lead the way. Adam Werner stopped 20 of 22 for the win.

SPECIAL TEAMS GETS WORK EARLY
The Condors have scored on the power play in three straight games. Shorthanded, the team has killed off 14 of 15 power plays (93.3%), but was needed on eight occasions last night as a combined 15 minor penalties were taken in the game.

EARLY LEAGUE LEADERS
Seth Griffith is t-2nd in the AHL in scoring with five points (2g-3a) in the opening three games of the season.

STRIKE FIRST
The Condors have opened the scoring in each of their three games so far this season and have allowed just six goals through the first week of the season.

HEAT NOTES
Dustin Wolf has stopped 66 of 69 shots through his first two starts this season… Jakob Pelletier is t-2nd among rookies in scoring with four points (2g-2a)… The Heat PK has surrendered three power-play goals on 12 chances this year, including two to San Diego last night… Former Condors d-man Kevin Gravel is on the Stockton roster.