Which reminds me there’s Chicken Tikka Masala and Roasted Pork Loin with Brussels Sprouts/Bacon in the Club Room Wednesday and Friday. May have to venture down there next week and check it out. After all, it’s my blog and I’ll do what I want … but even I can’t get a free Club Room meal.

The Condors sent Samuel Dove-McFalls to Fort Wayne yesterday with another forward transaction coming later today as well. The moves are a reflection of a Condors team getting bolstered offensively with the addition of Mattias Janmark and the improved health of Raphael Lavoie and Carter Savoie. Janmark has played 420 games in the NHL, reaching double digit goal totals on three occasions.

In the latest episode of “The Drop” on OilersPlus.com, they take you behind the scenes of the Penticton Young Stars tournament. It’s well worth the money to get exclusive access to the dressing room, interviews, and features with players who are here in Bakersfield and the Condors coaching staff.

Last night was vintage Stuart Skinner as the Oilers opened up a road trip with a 3-1 win in St. Louis. I think we’ve seen that type of performance a time or two in Condorstown.

Over the weekend, the Condors dropped two in Tucson, but Xavier Bourgault extended his point streak to three games, and he scored twice on Sunday. He just turned 20 last week and has a bright future ahead. It’s been a good run of homegrown first round picks in Condorstown with the likes of Jesse Puljujarvi, Kailer Yamamoto, Evan Bouchard, Philip Broberg, Dylan Holloway, and now Bourgault.

No blog is complete without some road trip food pics. As seen on Twitter, we had a great team meal Friday at Daisy Mae’s Steakhouse. Former AHL CEO David Andrews and his wife Marleen joined us as they have retired to the Old Pueblo. Other trip highlights: the Buffalo Chicken pizza from No Anchovies and the Cali Burger from The Hub Downtown. No As might be the top road pizza spot, followed closely by Pizza Antica in San Jose. 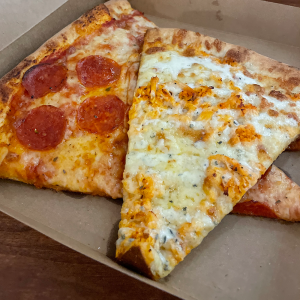 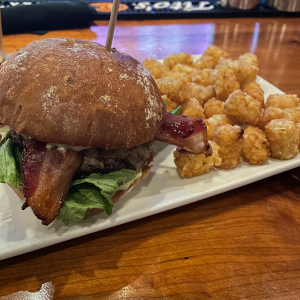 Talk to you Saturday from Ontario!

Ryan Holt aka Holty is the voice of the Condors in his 12th season. When presented with a tots option, you always go tots. Follow him on Twitter @CondorsHolty for more nonsense or shoot him an e-mail to RHolt@bakersfieldcondors.com with questions, comments, or blog ideas.