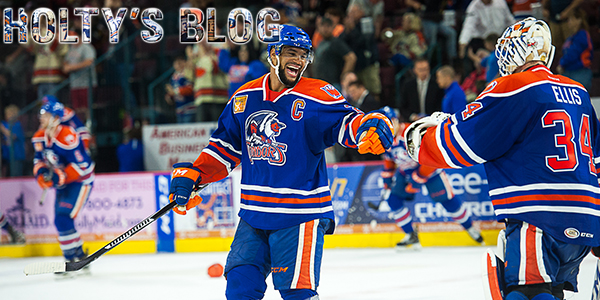 This is the first offseason blog of 2017 and with it coming in April, it means that the end of the season did not go the way the team wanted. But to be honest, I think the coaching staff got everything and more out of this group. Naturally, everyone is disappointed there were no playoffs, but the team took a step forward.

You may only read playoff blogs in the Spring, and that’s fine, but as I’ll remind you, it’s my blog and I’ll do what I want.

– I know the AHL will have unforeseen roster twists and turns, but I have a line chart from July 2016 where I listed Anton Slepyshev, Jujhar Khaira, Drake Caggiula, and Tyler Pitlick as Condors. Caggiula and Pitlick were hurt early on and in addition to Iiro Pakarinen’s mostly season ending injury, that potential lineup changed even before the Condors opened training camp and never saw the light of day. This is going to happen every season, but give me one of those four for the majority of the season and it’s a much different looking group up front.

– Mike Griffith had an interesting look at next year in this week’s Bakersfield Californian.

– Exit interviews are up on Condors.TV with the players. Ryan Hamilton’s is below as he gets healthy for the offseason. Nobody wanted to be on the ice over the last two months than him, but unfortunately it just wasn’t in the cards. He’ll be back and ready for October.


– Also in those interviews is Patrick Russell, who was the only player to dress in all 68 games for the Condors this season. He’s in Denmark with the Danish national team and will hopefully be on the final squad that heads to Germany/France in May for the World Championships.

– One player who will be at the World Championships is Jesse Puljujarvi who was loaned to the Finnish national team yesterday.

#Oilers loan Jesse Puljujärvi to Finland’s national team for #IIHFWorlds. He is able to be recalled at any time during the assignment. pic.twitter.com/9hghTEmyJv

– Holty, you promised more on the Black Aces. First, what the heck does that mean? The term originated back in the 40’s with Eddie Shore (piss on old time hockey!) to classify players who were out of the lineup and had the “dead man’s hand” (black aces, and a pair of eights). Today, it’s certainly a positive connotation as an “ace up your sleeve,” but still are a group of guys who join the playoff run, but figure to not play. Still, it’s a very good experience for Nick Ellis, Griffin Reinhart, Joey LaLeggia, Mark Fayne, Anton Lander, and Jordan Oesterle.

– Equipment sale? We will have one in the coming weeks, so be on the lookout.

– Game five tonight for the Oilers and Sharks at Rogers Place. 7:30 p.m. on NBCSN.

– I won’t reveal my whole bracket until after, but Anaheim over Calgary was the easiest pick of the first round.

– Lock of the week? Well a former Condor has scored a game-winning goal in each of the two wins for Edmonton. So let’s keep the trend going tonight!

Ryan Holt is the voice of the Condors who recently wrapped season six in Bakersfield. He’ll do a lot of bad golfing this summer. Follow him on Twitter @CondorsHolty for more nonsense or shoot him an e-mail to rholt@BakersfieldCondors.com with questions, comments, suggestions, or blog ideas.