Can you believe next week is August? I know I’ve said it before and I’ll say it again, but the offseason goes by quicker and quicker every year. However, last year we were still full bore into Outdoor Classic planning at this point and were still a month away from the schedule and the game announcement being released. So we’re ahead of the game I think.

You may think we’re planning something like that again this year and you’d be crazy, but as I’ll remind you, it’s my blog and I’ll do what I want.

– Want to take you back to last week when I openly nominated Ryan Hamilton for the Canadian Olympic Team in February. We have developments on the situation that have further clarified the matter at hand.

– So there are two pre-Olympics warmup type ‘tournaments’ and Canada has revealed a preliminary list of players. They’re all Canadians playing in Europe and a few former Condors: Taylor Beck, Rob Klinkhammer, and Ben Scrivens are on one of the two squads.

– This week’s player profile is on Mitch Callahan, who hails from Whittier, CA outside of Los Angeles. No guarantees he is here in Bakersfield, but has a very good and consistent AHL resume

Get to know SoCal’s own, Mitch Callahan #Condors20 >> https://t.co/gYDCgNmdDJ pic.twitter.com/wdG1UDOmVb

– Looking at what other teams are doing around the AHL, we start in Tucson where they hired an entirely new coaching staff

– Ontario has a new assistant coach, David Bell, who played for the Condors in 2002-03, to replace the Chris Hajt who left for Buffalo

– The team up the 99 needs a new assistant coach

– Belleville has a logo finally …. Meh. Binghamton still hasn’t revealed a logo. I’m sure they’ll have one by Opening Night.

– In the, “What are the players up to?” portion of the blog …. Recent signing Yohann Auvitu is climbing on a Portuguese island off the northwest coast of Africa.

What a great day up in the mountains again ⛰ #madeira

– Patrick Russell was taking a dip in Bali, Indonesia

Thank you to the AFN chiefs for having me!

– And Ben Betker worked on his cornhole bag toss recently outside of Vancouver.

One of the better Saturdays #GeorgeFreemans

– Sidenote, how about this note on cornhole? They’ll televise anything nowadays.

– Lock of the week? Friend of Condorstown and UFC Light Heavyweight Champion Daniel Cormier is in action this weekend against Jon Jones at UFC 214 in Anaheim. Despite being the champ, he’s actually an underdog. If this fight goes off (it’s been canceled in the past because Jones has had issues), I’m taking Cormier +210 (that’s better than 2-1 odds) 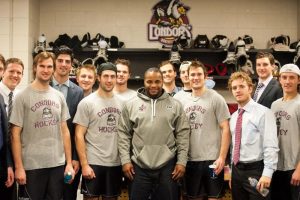 – DOUBLE LOCK OF THE WEEK! I don’t think this has been done before. If it has, don’t @ me. But, our other friend of Condorstown Donald “Cowboy” Cerrone is on the card this weekend too. He’s +130 underdog against Robbie Lawler. I smell a Condorstown parlay.

The Cowboy is in the building. #Condorstown #MMA #UFC pic.twitter.com/yemQmTu52R

Ryan Holt aka Holty is the voice of the Condors and enters his 7th season this year. He’ll take crinkle cut french fries over any other kind any day of the week. Follow him on Twitter @CondorsHolty for more nonsense or shoot him an e-mail to RHolt@bakersfieldcondors.com with questions, comments, or blog ideas.