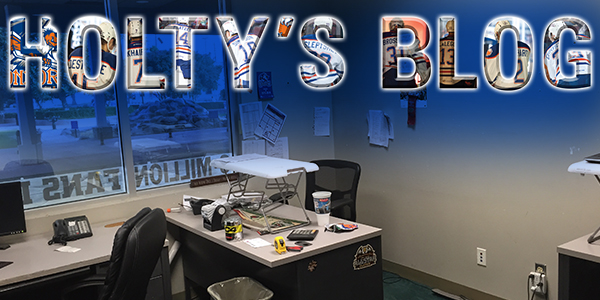 This blog comes to you for the final time from “the office with a window.” You may think this has no significance, but it does. When I arrived in Condorstown, the “communications” office was the back office. I think they put us back there to not hear us, but regardless, it did not have a window and no natural sunlight.

Then, about three years ago, as people departed, the “office with a window” opened up and it has been our home ever since. It has served us well and even though the back office, through a knocking down of walls, currently has windows, we have remained.

That all changes today. This is the construction blog and as I’ll remind you, it’s my blog, and I’ll do what I want.

Ryan Holt a.k.a. Holty enters his sixth season in Condorstown in 2016-17. He will golf often during his week out of the office. Follow him on Twitter @CondorsHolty for nonsense or shoot him an e-mail rholt@bakersfieldcondors.com with questions, comments, or blog ideas.