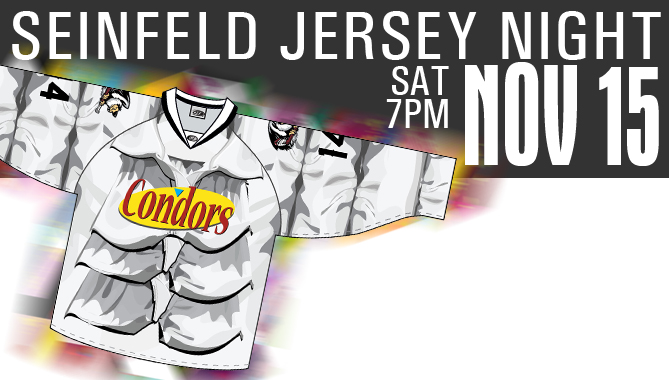 TONIGHT’S GAME: Condors v. Idaho Steelheads (doors open at 6 p.m. / 5:45 p.m. for STH)
PROMOTIONS: Seinfeld Puffy Shirt Jersey Raffle and Auction – jerseys will be auctioned off to benefit M.A.R.E., five of the jerseys will be raffled for free, sponsored by KUZZ 107.9 & American Business Machines; KGET-TV 17 Coat Drive – donate a new/gently used coat and get 2-for-1 admission; donate a can of soup and get 2-for-1 admission; Kramer impersonator “Ozmo Kramer” and the actress who portrayed “the low talker” from the puffy shirt episode will be on hand for pictures
TICKETS: Box Office 1-800-745-3000
PLACE: Dignity Health Home Ice at Rabobank Arena
RADIO: Fox Sports 970 AM / www.foxsports970am.com / iHeartRadio App
WEBCAST: ECHL.TVDownload Seinfeld Night roster

**Fill out the enter to win forms when you arrive to win one of five jerseys given away OR one of two Festivus poles**
LW Francis Verreault-Paul’s “Babu Bhatt” jersey will be auctioned off during the first intermission, with the rest of the auction post-game.TONIGHT
The Bakersfield Condors wrap a weekend set with the Idaho Steelheads at Rabobank Arena. It is

meeting three of 11 of the season series with the Condors getting one point from the first two games. The series shifts to Boise for three games in the first week of December.IN CASE YOU MISSED IT
Last night, the Condors took a 2-1 lead on a shorthanded goal from LW Chase Schaber in the third period, but could not hold the lead and eventually fell to Idaho in a shootout, 3-2. RW Sebastien Sylvestre scored in the second period to bring the Condors even. G Frans Tuohimaa made his first home start for Bakersfield and made 29 saves on 31 shots.
Idaho won their second straight win, thanks to two regulation goals from F Alex Belzile and shootout tallies from F Jason Bast and F Colten Beck. G Olivier Roy made 24 saves on 26 shots to pick up his league-leading seventh win of the season.CONDORS NOTES
The Condors have held a lead in 12 of their 14 games this season… Bakersfield is now 1-1 in games decided by a shootout… RW Jonathan Lessard picked up an assist in his return to the lineup after missing the last seven games with an injury… C Nick MacNeil has four points in his last five games (1g-3a) and five points (1g-4a) in seven games in November… LW Chase Schaber has four points (2g-2a) during his three-games point streak.

GET THE BEST SEATS TO TEDDY BEAR TOSS

Tuohimaa with 40 saves as Condors dump Aces, 3-2
Scroll to top