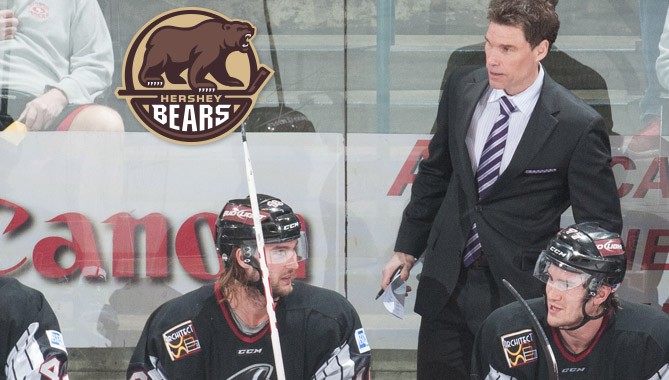 CONDORSTOWN, Calif. – The Bakersfield Condors, owned by the Edmonton Oilers, announced today that Head Coach Troy Mann is leaving the team to accept the head coaching position in the American Hockey League (AHL) with the Hershey Bears. Hershey is the AHL affiliate of the National Hockey League’s Washington Capitals.

Mann, 44, earns the promotion after a memorable lone season at the helm of the Condors, posting a 36-30-0-6 record and taking the team

into the conference finals for the first time in team history. The Condors went 35-20-0-5 after Thanksgiving to overcome a poor start and post one of the best records in the league for the rest of the season.

The New Brunswick native returns to the AHL, this time as the head coach of the team with which he spent four campaigns, from 2009-13. Mann was an assistant coach with the Bears during that time, winning a Calder Cup in 2010 and helping the club post 180 victories in four seasons.

The 2013-14 Condors season was the first as a head coach for Mann since 2007-08, when he coached the Columbia Inferno. In each of his last two seasons as a head coach, he has guided his ECHL clubs into the third round of the playoffs. He was the first Condors head coach to have played for the team, having spent part of the 2000-01 season with the team.

“Thank you to Jonathon Fleisig, the Edmonton Oilers, Matt Riley, John Olver and the entire Condors staff for providing me with the opportunity to work in Condorstown. It has been a pleasure to be a part of one of the premier organizations in the ECHL. It is bittersweet to depart, but this is an opportunity that I have been working towards my entire coaching career. I wish the organization nothing but the best moving forward.”

“Troy is on the fast track. He is a great coach and a great person.  We wish we could have had him here longer of course, but we’re grateful we could be a part of his journey, and in just one season he has had a tremendous impact on our organization. We wish him and Lori all the best.

“Moving forward,” Riley continued, “with the Oilers at the helm, we feel very strongly that we will have a number of good candidates, and ultimately a terrific head coach.”

Mann has departed for Pennsylvania and will be introduced formally as head coach of the Bears on Thursday. He will be available to Bakersfield media the week of July 14. Details on a press event that week will be announced at a later date.
OPENING WEEKEND GROUPS AND SUITES!!!!
Opening night is 108 days away on Oct. 17. Save money off opening weekend box office ticket pricing when you book a group for as few as 10 people. PLUS, suites are available, but will fill fast for opening weekend, and include the ALL-NEW Condors Legends Suite and Oilers Suite. Contact the team’s front office at 324-PUCK (7825) to book your group or suite TODAY!
THE BEST IN FAMILY FUN!!!
Ticket plans for the most affordable family fun are on sale now. They’re great for businesses as well to increase sales and improve morale around the office! Click here to check out the options with a plan to fit every schedule all while saving up to 20% off box office pricing.