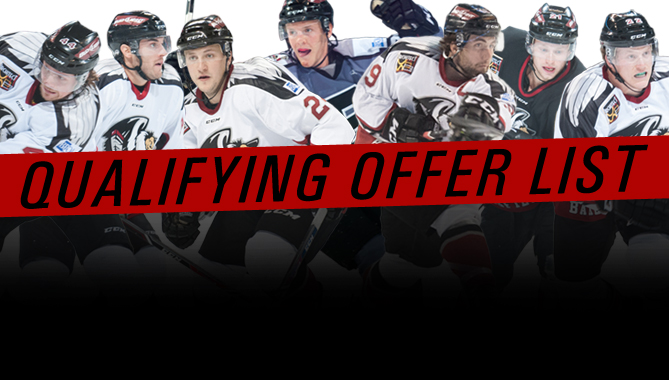 Why wasn’t your favorite player from last season Qualified?
The complete rules on Qualifying Offers are below. Although some players simply will not return for 2014-15 for various reasons, there are three distinct reasons why a certain player may not have been qualified:
1. He could already have signed a contract. Players who have been signed already will be announced at a later date.
2. He is a veteran. Veteran players (260 pro games or more) can become free agents on Aug. 1 regardless of whether they have been qualified or not. The Condors did not qualify any veteran players.
3. He was/is on an AHL or NHL contract. G Laurent Brossoit, for example, was assigned to Bakersfield by the Oilers. He was not a player the Condors signed to an ECHL contract, so he is not eligible to be qualified. Players also included under this rule: D Joey Leach, G Chet Pickard, F Andrew Carroll, F Greg Miller, F Mitch Holmberg and D Collin Bowman.

What you need to know about Qualifying Offers:

Condors ticket plans to the most affordable family fun in Bakersfield are on sale now. Huge savings on box office pricing, discounted parking, exclusive access to VIP events, early entry into all Condors games and much much more! Check out our mini-plans as well, with plans to fit every lifestyle. Click here or contact the team’s front office at 324-PUCK (7825)
Early bird pricing ends today, with all ticket plan prices increasing at the end of the day. You know you are coming out to games this season. Act now, and don’t spend more than you have to!

Opening night is 108 days away on Oct. 17. Save money off opening weekend box office ticket pricing when you book a group for as few as 10 people. PLUS, suites are available, but will fill fast for opening weekend, and include the ALL-NEW Condors Legends Suite and Oilers Suite. Contact the team’s front office at 324-PUCK (7825) to book your group or suite TODAY!