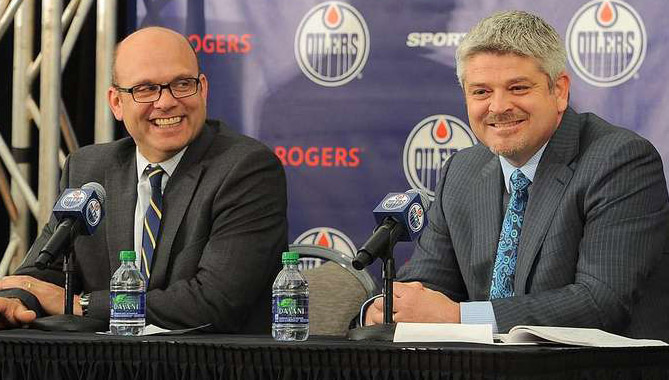 Most recently, McLellan was the Head Coach of Team Canada at the 2015 World Hockey Championship, leading Canada to their first gold medal since 2007 with an undefeated record of 10-0 and an impressive 6-1 win over Team Russia in the gold medal final.

McLellan, 47, has spent the past seven seasons as Head Coach of the San Jose Sharks, posting a record of 311-163-66 in 540 games as the Sharks bench boss. During that span, McLellan led the Sharks to six playoff appearances, four 40-plus win seasons, three 100-point seasons, captured the Presidents’ Trophy (2009), three Pacific Division titles and made back-to-back appearances in the Western Conference Final (2010, 2011). No Head Coach in NHL history has won more games in their first four seasons behind the bench than the 195 collected by Todd McLellan.

Oilers President of Hockey Operations and General Manager Peter Chiarelli says, “We are extremely happy to introduce Todd as our new head coach. He is a high energy person and a high level thinker who will work well and demand the most from our group. Todd has had success at many levels and we are looking forward to him leading our team next season.”

In, 2010, the Melville, Saskatchewan native became just the third coach in National Hockey League history to record 50-plus wins in his first two seasons as Head Coach. McLellan was named a finalist for the NHL’s Jack Adams Trophy in 2008-09 and became just the sixth NHL coach (first since 1990) to lead his team to the Presidents’ Trophy, posting a record of 53-18-11 in his first season as a Head Coach.

Before entering the NHL coaching ranks, McLellan spent four seasons as a Head Coach with the American Hockey League’s Houston Aeros, capturing the 2003 Calder Cup Championship. Under his guidance, McLellan led the Aeros to a 154-111-37-18 mark and was named the 2003 Minor Coach of the Year by The Hockey News. He was also selected to coach two AHL All-Star Games during his tenure in Houston. McLellan also spent the 2000-01 season as Head Coach of the Cleveland Lumberjacks of the International Hockey League.

McLellan spent six seasons in junior hockey as Head Coach with the Swift Current Broncos of the Western Hockey League, where he also served as the General Manager in his final four seasons. He was named the WHL Executive of the year in 1997 and WHL Coach of the Year in 2000. The Broncos also captured division titles in 1996 and 2000 under McLellan.

McLellan played his junior hockey in the WHL with the Saskatoon Blades and was drafted by the New York Islanders in the fifth round (106th overall) in the 1986 NHL Draft. He played parts of two seasons with Springfield in the AHL and played in five games with the Islanders in 1987-88, posting two points (1G, 1A) before a shoulder injury ended his career.