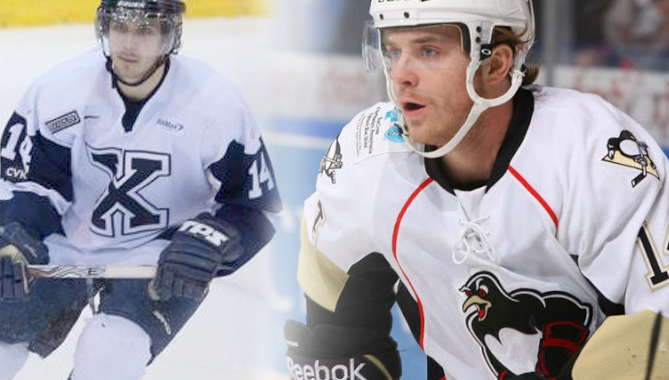 CONDORSTOWN, Calif. – The Bakersfield Condors, ECHL affiliate of the Edmonton Oilers, announced today that the team has signed prolific scorer LW Chris Collins and agreed to terms with rookie D Nick Pageau for the 2013-14 season. With their additions, the roster stands at 14 players (9 F, 5 D).

Collins, 29, enters his eighth professional season with tremendous success in the American Hockey League (AHL), DEL (Germany), and ECHL. The majority of his career has been spent in

the AHL with the Providence Bruins and Wilkes-Barre/Scranton Penguins. In 190 AHL games, Collins notched 38 goals and 43 assists for 81 points. He finished the 2012-13 campaign with the Penguins and played 13 playoff games with five points (2g-3a) as the team advanced to the Eastern Conference Finals.

“Any time I’ve played in Bakersfield I’ve always been really impressed with the rink, fanbase, and the city,” Collins said. “I’m a close friend of Murph (Ryan Murphy) and when he made the move to Bakersfield, I was definitely interested in coming. Everywhere I have been, I’ve been a younger guy, so this year I’m looking forward to being an older player and helping the younger guys have a successful season.”

The Fairport, NY native’s success extends internationally as well with 112 points (48g-64a) in 125 games in the DEL, Germany’s top professional league. His best professional season came in Germany as a member of the Augsburger Panther with 23 goals and 23 assists for 46 points in 47 games.

Prior to signing with the National Hockey League’s (NHL) Boston Bruins in 2006, Collins shined at Boston College, including leading the country in scoring as a senior in 2005-06. A Hobey Baker Award Finalist (along with NHL stars Matt Carle and Brian Elliott), Collins scored 34 goals and added 29 goals for 63 points in 42 games. He was a teammate of current Condors assistant coach Ryan Murphy for three seasons at BC.

Troy’s Take: “Ryan Murphy deserves a ton of credit for this signing having played with Chris at Boston College. I’ve seen Chris play a bunch with Wilkes-Barre and he will be a dynamic force in the ECHL. He certainly should be a top-line player for us this season.”

four seasons at St. Francis Xavier University in Canada. While there, the 6’1″, 193 lbs. defenseman totaled 41 points (9g-32a) from the blue line. He was named to the CIS All-Rookie Team in 2009-10 when he scored three goals and added eight assists for 11 points in 14 games.

“The new staff, direction of the team, and how the coaching staff wants to run the team like an AHL team really impressed me,” Pageau said. “I’m a puck-moving defenseman and try to be responsible in my own end while also jumping up into the play.”

Prior to his collegiate career, Pageau played four seasons for Belleville in the Ontario Hockey League (OHL). With the Bulls, the Stoney Creek, Ontario native played 229 games and compiled 88 points (18g-70a). He reached the 2008 Memorial Cup, ultimately falling to Kitchener in the semi-final.

Troy’s Take: “Nick came highly recommended from his college coach, Brad Peddle, who I played with and certainly trust his opinion. He’s a strong skater who should be a good two-way defenseman for us. Nick’s a right shot which are hard to come by and I’m looking forward to seeing what he will bring to the table.”

Best ways to use your season tickets, #20: Offer a unique incentive for customers to do business with you.