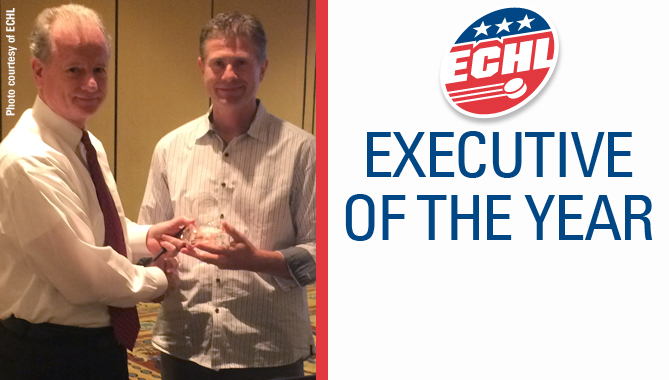 CONDORSTOWN, Calif. – The Bakersfield Condors, owned by the Edmonton Oilers, announced today that Team President Matthew Riley has been named the recipient of the 2013-14 ECHL Executive of the Year award.
Under his leadership, he has guided the Condors to an ECHL-high 13 front office award winners in 10 years,

most of any team. In addition, Riley becomes just the second ECHL executive to win the award twice. He also received the award in 2007 and was named the WCHL Executive of the Year in 2000.

“I’m grateful to everyone involved, past and present, with the Bakersfield Condors organization, that I receive an award on their behalf,” said Riley. “This award is a symbol of all the hard work and passion that our staff and fans put in this year. We’re thankful for the guidance, leadership, and support from our new owners, the Edmonton Oilers, and from the other member teams of the ECHL.”

Riley was instrumental in the negotiations that saw the National Hockey League’s Edmonton Oilers purchase the the Condors, giving the organization the resources and support for the long-term stability of the team.

He oversaw a box office sales increase of over 6% in 2013-14 and the team setting a new record in group revenue.

In the community, the team continued its tremendous work in Bakersfield and Kern County raising more than $350,000 in cash and goods for non-profits, bringing the team’s historical total to over $4.6 million.

On the ice, the Condors made history, advancing to the Conference Finals for the first time, thanks in large part to Riley’s allocation of more resources to the hockey operations department.

His innovative and progressive promotional ideas, such as this season’s Gettysburg Address Jersey, Undie Sunday Toss, and Cemetery Plot Giveaway garnered the Condors national publicity which continued the team’s long-standing tradition of fun and entertainment.

SAVE $$$$ WITH CONDORS TICKET PLANS
Condors ticket plans to the most affordable family fun in Bakersfield are on sale now. Huge savings on box office pricing, discounted parking, exclusive access to VIP events, early entry into all Condors games and much much more! Check out our mini-plans as well, with plans to fit every lifestyle. Click here or contact the team’s front office at 324-PUCK (7825)
Early bird pricing ends on June 30, with all ticket plan prices increasing on July 1. Act now and save before prices go up!
WELCOME BACK SPECIAL
Any past Condors season ticket holder who did not have a ticket plan in 2013-14, now is your time to jump back on board. Purchase a full season ticket plan and receive 50 tickets to Opening Night on Friday, Oct. 17. If mini-plans are your thing, purchase any Condors mini-plan for the upcoming season and receive 20 tickets to Opening Night! Call 324-PUCK (7825) and welcome back, we missed you!
OPENING WEEKEND GROUPS AND SUITES!!!!
Opening night is 121 days away on Oct. 17. Save money off opening weekend box office ticket pricing when you book a group for as few as 10 people. PLUS, suites are available, but will fill fast for opening weekend, and include the ALL-NEW Condors Legends Suite and Oilers Suite. Contact the team’s front office at 324-PUCK (7825) to book your group or suite TODAY!

Followon TwitterSubscribeto RSS Feed
Follow us during the offseason

A Day in the Life of Matthew Riley
Scroll to top