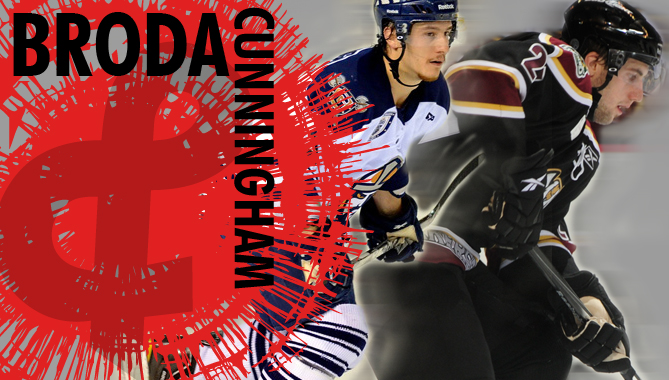 Cunningham, 26, enters his sixth professional year in 2013-14 after

A veteran of 271 games at the ECHL and American Hockey League (AHL) levels, Cunningham was named to the 2010-11 All-ECHL First Team as a member of the Greenville Road Warriors. In 69 games that season, the London, Ontario native potted seven goals and 36 assists for 43 points with a +19 rating, good for third among ECHL defensemen in scoring. His ECHL career split between Elmira and Greenville has spanned 265 games with an outstanding 156 points (29g-127a) from the blue line and he has been a “plus” player in each of his professional seasons.

“I was looking for a change and of all the teams I talked to, Bakersfield had the best organization,” Cunningham said. “I’ll bring experience, leadership, and I’ll look to lead by example. I’m more of an offensive-minded defenseman, but well-rounded and I’ll drop the gloves if needed. Whatever the team needs to have a good year.”

“He’s still young, just 26 years old, but a veteran with 271 games, and a guy who can develop further as a player. He’s a number one defenseman who will anchor our power play. He’s motivated to get to the next level and rightfully so.”

Broda, 23, returns to Bakersfield, a place he was assigned to by the

Minnesota Wild in 2010-11, after signing a three-year National Hockey League (NHL) entry level contract. The Yorkton, Saskatchewan native enjoyed tremendous success, scoring 17 goals and assisting on 13 others for 30 points in 32 games. He finished fifth on the team in scoring that season despite his brief stint and had five multi-goal games during that time. He added a goal for the Condors in the 2011 ECHL All-Star Classic held in Bakersfield.

“I enjoyed my time in Bakersfield and from talking with Troy (Mann) and John (Olver), there was interest there,” said Broda. “I’m motivated to play well and there is a great opportunity to have a good year. Since my time in Bakersfield, I’ve matured as a player and got stronger in the physical and defensive aspects of the game. I’m looking forward to bringing more of my offensive side this season.”

“He’s an excellent goal scorer that I’m familiar with from development camps with the Capitals. When his name came across the board, having spent time in Bakersfield before, it was a no-brainer. He wants to get back to the AHL as quick as possible and he is motivated to have a successful season.”

Slapshot, Baby Cal and Community Relations Assistant Kelly Carter are at the Kern County Museum’s Summer of Fun, Back-to-School Day from 9 a.m. – 1 p.m. today. It’s the last week of summer for most students in Condorstown and the Condors are helping end it on a high note! Come win some prizes and test your hockey skills in the Condors slapshot booth. The museum is located at 3801 Chester Ave.

Don’t miss Opening Night when the Condors host the Colorado Eagles on Friday Oct. 18! Ticket packages are on sale now for the 2013-14 season for just $10/month. Click here or call 324-PUCK (7825) for more information.

Best ways to use your season tickets, #1: Invite a customer to a game who hasn’t done business with you recently.