“The biggest part of our relationship is trust and how that trust has grown over the past three seasons from working together on and off the ice.”

The words of Stuart Skinner regarding his relationship with Condors Goaltending Coach Sylvain “Sly” Rodrigue speak volumes for the third-year pro. That trust has been a big part of the Oilers 2017 3rd round draft pick’s ascension to an elite American Hockey League netminder, leading the AHL in wins with 20 this season.

Skinner is part of a wave of young netminders in the organization that look to break through over the next few seasons and the first Oilers high drafted goaltender to study under the tutelage of Rodrigue.

“Working with young goaltenders is not a straight highway,” Rodrigue said. “The first year is a huge transition year, on and off the ice. They’ve been so dominant at their other levels, but it’s a completely different game at the AHL level. Goaltenders have to learn the work ethic it takes to perform every single night. That has been the biggest growth in his game from day one to today. He’s a man. He’s not a young kid coming out of junior anymore. He’s a real top prospect for this organization.”

The Edmonton native spent the majority of his rookie season in the ECHL with the Wichita Thunder, but showed glimpses of his future helping the Condors to a Game 5, double-overtime victory in the 2019 Pacific Division Finals. Last season, expected to share the net, an early injury to Shane Starrett forced Skinner into the leading role and 42 appearances in shortened 2019-20 season.

“That year was important for him to go through the tough moments,” Rodrigue remarked. “It’s sometimes the best for a young goaltender and their development.”

When the “highway isn’t always straight” Skinner knows that he has someone backing him up on a daily basis to be a sounding board for all that a goaltender needs.

“Having someone like Sly in your corner every day, fighting for you, is incredible,” Skinner said. “He takes the time to listen and focus on points that I may make as well. I’m able to share thoughts with him and that’s huge for a player to develop and have that back and forth. We get to have conversations about hockey and life, and he’s helped me with a lot of aspects of my life.”

And for Rodrigue, the best part of the gig is getting to see players mature in Bakersfield and eventually reach the highest level, like Skinner did this season, backstopping the Oilers to a victory over Ottawa in his first National Hockey League start.

“For me, I haven’t had the chance until recently to work with a lot of young drafted goalies. We want to give everyone a chance to reach the highest level. That’s the goal of this organization and it is fun to see players we work with be successful.”

Consistency might be the biggest key for any goaltender and it’s a word used night in and night out to describe the overall Condors play. There have not been many lulls in a season which saw the team rattle off nine straight wins with Skinner in net and an over .720 points percentage in their final 34 games of the regular season. That consistency in net has been a product of meticulous preparation every single day in the work put in by Rodrigue and Skinner.

“He comes in with a plan for me every day,” he said. “We have the confidence in each other to trust the process. It’s interesting having your own coach. It’s unique. In game it’s very easy to get in your own head, it’s a very up and down position. But, Sly helps keep it even keel and that’s why he’s been such a big factor in our success.”

Those in-game adjustments are a by-product of the relationship built between the two.

“I’m his eyes upstairs,” Rodrigue said. “He finds a way to perform every single night. Night after night we know what to expect. I might go in during an intermission for a couple seconds if I see a tendency being changed or something to focus on, but his consistency is something that has been growing and growing. I’m happy for him, because he deserves it.”

Skinner and the Condors kick off their postseason run tonight at 6 p.m. against the San Diego Gulls. 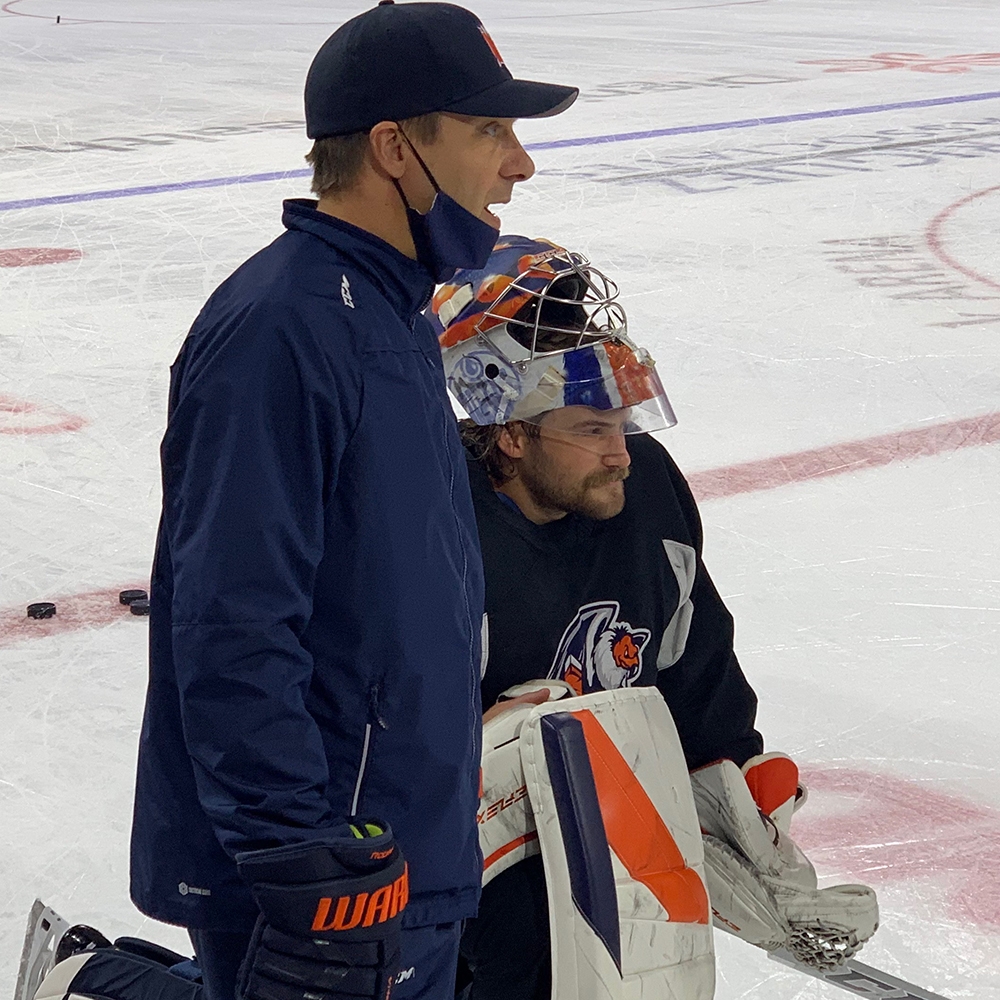