The Bakersfield Condors host the San Diego Gulls at 6 p.m. on Dignity Health Home Ice at Mechanics Bank Arena in Game 1 of the Pacific Division Semifinals. A limited number of tickets are on sale at AXS.com and can be purchased online only by clicking here. For those attending, please review updated procedures including mandatory wearing of face covers, clear bag policy, and food and beverage only to be consumed on the concourse. Doors open at 5 p.m.

The game will be broadcast LIVE on 23ABC presented by Three-Way Chevrolet and Dignity Health with radio coverage on Fox Sports 970 AM, the iHeartRadio App, and streamed on AHLTV.com. 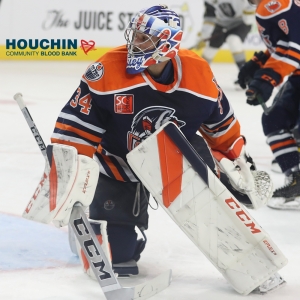 You can win a Stuart Skinner game-worn, signed jersey for just $10 tonight thanks to Houchin Community Blood Bank. Click the button below to get your raffle tickets with the winner announced during the third period. Anyone, anywhere can win. 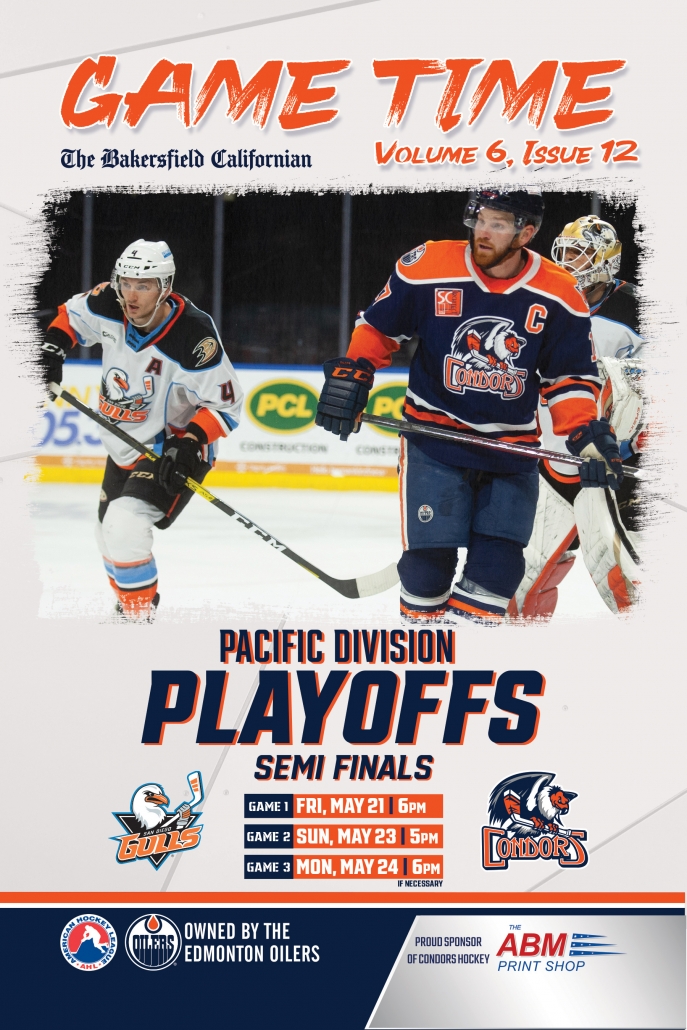 The Playoff Edition of GAME TIME can be downloaded by clicking the button below. It features a commemorative playoff cover and “10 Questions With..” Jakob Stukel.

BIG BRAND TIRE FIRST GOAL CHALLENGE: Enter on the team’s Facebook page starting at noon for your chance to win a complimentary oil change.
YOU WIN WHEN THE CONDORS WIN THANKS TO SAMCO: When the Condors win, screenshot the winning image on the team’s Instagram story and bring to any Bakersfield SAMCO location for a complimentary 20 oz. icee or fountain soda within 24 hours.

The Bakersfield Condors and San Diego Gulls meet for Game 1 of a Best-of-3 Pacific Division Semifinal series. During the regular season, the Condors went 3-5-0 against San Diego, but were 3-1 at home with all three potential games of this series to take place in Bakersfield.

Bakersfield and San Diego meet in the postseason for the second time in the AHL era. San Diego took a Best-of-7 second round series in 2019 in six games. Three of those games went to overtime, including four-overtime and double-overtime contests.

Cooper Marody led the American Hockey League in goals this season with 21 and in the process received the Willie Marshall Award as the league’s top goal scorer.

Stuart Skinner was the only AHL goaltender to eclipse 20 victories during the regular season. The third-year pro went 20-9-1 and his 2.38 goals-against average was sixth in the AHL.

TOP OF THE TOP

Both teams enjoyed great success on the penalty kill this season with the Condors and Gulls finishing 1-2 among the AHL. Bakersfield took the top spot at 85.5% while San Diego finished a close second at 85.1%. Bakersfield enters the postseason having killed off 18 straight power plays.

Max Gildon finished t-7th among all AHL d-men in scoring with 19 points (2g-17a) in 32 games… Bakersfield finished the season 24-9-1 it its last 34 games (.721)… Tyler Benson was third in the AHL in assists with 26… James Hamblin, who scored the game-tying goal in the third period comeback during the season finale led the team in rookie goals with seven… Raphael Lavoie had a goal and assist in the season finale and finished the season with 10 points (5g-5a) in 19 games. Combined with his time in Sweden, the Oilers 2nd round pick of 2019 has played 74 games in 2020-21.

Andrew Poturalski led the AHL in scoring this season with 43 points (9g-34a) in 44 games… Lukas Dostal had the second most wins of any rookie goaltender with 15… Benoit-Olivier Groulx was fifth among rookie skaters with 29 points (10g-19a) in 42 games… First round picks Jamie Drysdale and Trevor Zegras along with Gulls captain Sam Carrick were all assigned to San Diego in the last week after spending the majority of the second half of the season with Anaheim.