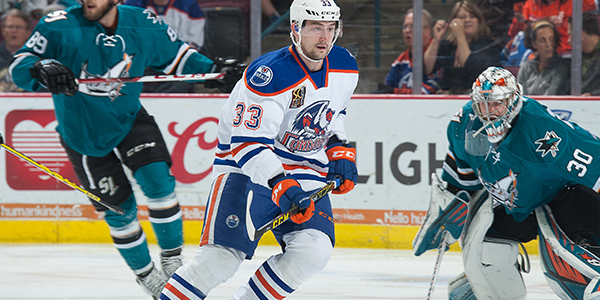 Anton Slepyshev arrived in North America in 2015-16 for his first season away from his native Russia and was one of 17 players to suit up for the Condors and the Edmonton Oilers. Drafted in the 3rd round (88th overall) of the 2013 NHL Draft by the Oilers, Slepyshev brought with him over 159 games of KHL experience to his “rookie” season in North America.

After an impressive preseason with the Oilers and an injury to winger Jordan Eberle, Slepyshev began the season in Edmonton. At just 21 years old, the winger found himself playing in the NHL. He went on to post one assist in those 11 games with the Oilers before being sent to Bakersfield at the beginning on November.

In Condorstown, Slepyshev was reunited with longtime friend Bogdan Yakimov. The two grew up playing together in their early days and now were a part of the same organization professionally.

Like other rookies, adjusting to the North American pro game can be difficult. Traversing halfway across the world to play in a smaller rink in an unfamiliar setting can be even more challenging. That was the situation presented to Slepyshev, playing in a much more physical and demanding league in the AHL.

After being held pointless in his first six games, the Penza, Russia native scored his first goal in Winnipeg and four points (2g-3a) in five games at the end of November. After a slow month of December, an injury wiped out the entire month of January.

However, the last three months showed the type of player that Slepyshev could be. With his speed and shot on display, he notched 16 points (9g-7a) in 28 games including a five-game point streak (3g-3a) from March 8 – March 19. He finished the season as one of six Condors to register over 100 shots on goal and in 49 games had 21 points (13g-8a).

Progressing into his second year in North America, the 22-year old will certainly look to build off his experiences from year one and should take on an added scoring role with a Condors team who could use some pop up front.

NEED TO KNOW: HOCKEY IS OVER
Scroll to top