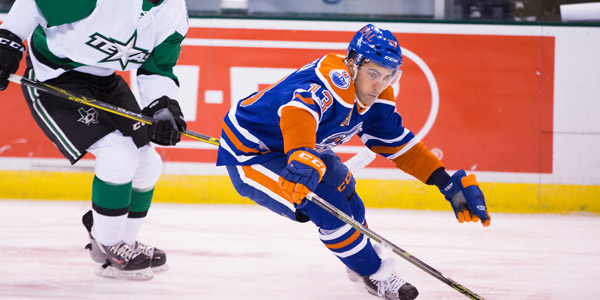 At 5’10”, 185 lbs. some may call Condors D Joey LaLeggia undersized given the big, heavy nature of today’s game.

“I use it as a motivational tool, because of how many people tell me I can’t do it and I shouldn’t be here,” he said. “There are so many smaller guys in the NHL these days and they can all skate and handle the puck. That’s the kind of game I like to bring.”

A Hobey Baker Award finalist for the NCAA’s top player, the product of the University of Denver had a stellar collegiate career amassing 40 points in 35 games his senior season from the blue line.

Drafted in the 5th round of the 2012 NHL Entry Draft, the Burnaby, B.C. native turned pro this season and went on the lead the Condors in rookie scoring with 27 points (8g-19a) in 63 games.

LaLeggia adjusted to the pro game and hit his stride after Thanksgiving in a stretch where he accumulated 19 points (7g-12a) in 23 games from Nov. 27 – Feb. 10. For much of the season, the rookie was the team’s leader in plus/minus and proved to be used in all situations.

It’s the consistency that will earn even more notice next season as LaLeggia hopes to make his NHL debut.

“That opportunity has to be earned. That’s on me, not on them (staff),” LaLeggia noted. “I need to make sure I put myself in the best possible physical condition this summer.”

Figuring to take on an even more crucial role with the Condors next season, LaLeggia is prepared to take the next step in his progression in the pro ranks.

NEED TO KNOW: Watch the Calder Cup for Free
Scroll to top