The Bakersfield Condors host the Colorado Eagles in the finale of a four-game season series. Bakersfield is 2-1-0 against the Eagles on the season and 1-0 in Bakersfield. A limited number of tickets are on sale at AXS.com by clicking the button below. Doors open at 5 p.m. 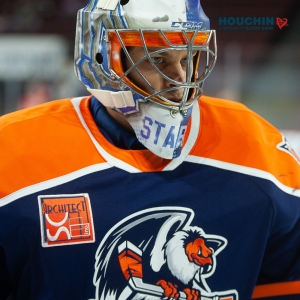 Win a Shane Starrett game-worn, signed jersey tonight by entering the Houchin Community Blood Bank jersey raffle for just $10. Winner will be selected during the second intermission of tonight’s game. ANYONE, ANYWHERE can win. Purchase your tickets at the button below. 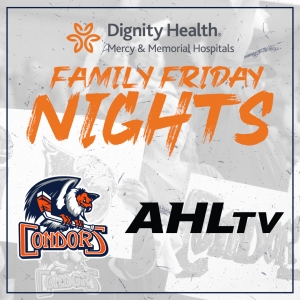 WATCH THE GAME FOR FREE

Thanks to Dignity Health Mercy and Memorial Hospitals you have the opportunity to watch tonight’s game complimentary on AHLTV. Enter to win below.

IN CASE YOU MISSED IT
Bakersfield earned its third straight win with a 2-1 victory over Colorado on Wednesday. Stuart Skinner picked up his league-leading 19th win of the season. Cooper Marody scored his league-leading 21st of the year.

Colorado scored first, but was quickly answered and fell on Wednesday. TJ Tynan picked up his 25th assist of the season, which is good for second in the AHL.

The Condors are a point ahead of Henderson in the Pacific Division race. With Henderson playing one fewer game than the Condors, Bakersfield will need to finish two points ahead of the Silver Knights to claim the division’s regular season crown. The two teams meet three times in Las Vegas to finish the regular season next week.

Cooper Marody scored his 21st of the season on Wednesday, continuing to pace all goal scorers in the AHL. He has scored in three straight games, including each of the last two game-winners for the club.

TJ Tynan is second in the AHL in assists with 25… Adam Werner stopped 25 of 27 on Wednesday… Sheldon Dries opened the scoring… The Eagles were held without a power play goal for just the third time in 17 games.