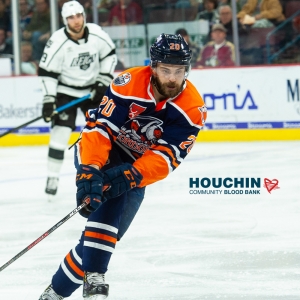 Enter to win a game-worn, signed Cooper Marody jersey. Marody currently leads the AHL in goals and scoring. Click the button below to enter for just $10 with the winner drawn during the third period of the game tonight. Anyone, anywhere can win.

TONIGHT
The Bakersfield Condors and San Jose Barracuda wrap up a weekend set. It is the third of 10 season meetings with the Condors winning the first two by a combined 10-1. The teams will play two more in San Jose on Tuesday and Wednesday.

San Jose fired the opening seven shots of the game, but came up emptyhanded until an Alexander True goal in the third period broke the shutout bid. The loss snapped a three-game point streak for the Barracuda who came in off a victory on Tuesday over San Diego.

Rookie James Hamblin has goals in each of his last two games. The product of the Medicine Hat Tigers scored shorthanded last night, giving the Condors consecutive games with shorthanded markers.

The Condors seven-game winning streak has come with just seven goals allowed over that span. In addition, the team has not allowed a first period goal during the streak and has outscored the opposition 13-0 in the first over seven games.

C Cooper Marody picked up 100th point as a Condor last night in his 103rd game played. His nine goals on the season leads the AHL… G Staurt Skinner is second among goaltenders in goals-against average at 1.56 and fourth in save percentage at .940. He has stopped 177 of his last 184 for a .962 save percentage over the past seven games.

RW Joachim Blichfeld was reassigned to the Barracuda on Wednesday. Before his recall he had nine points (6g-3a) over a five-game scoring streak… C Noah Gregor had a goal and assist on Tuesday against San Diego… LW Jayden Halbgewachs has three goals in four games. His three game-winning markers leads the team as well.