The Bakersfield Condors host the San Jose Barracuda on Dignity Health Home Ice at Mechanics Bank Arena at 6 p.m. Bakersfield is 10-1-1 in its last 12 games and is unbeaten in nine straight (8-0-1) at home. Tonight’s game will be broadcast on Fox Sports 970 AM, the iHeartRadio App, and streamed on AHLTV driven by Three-Way Chevrolet. 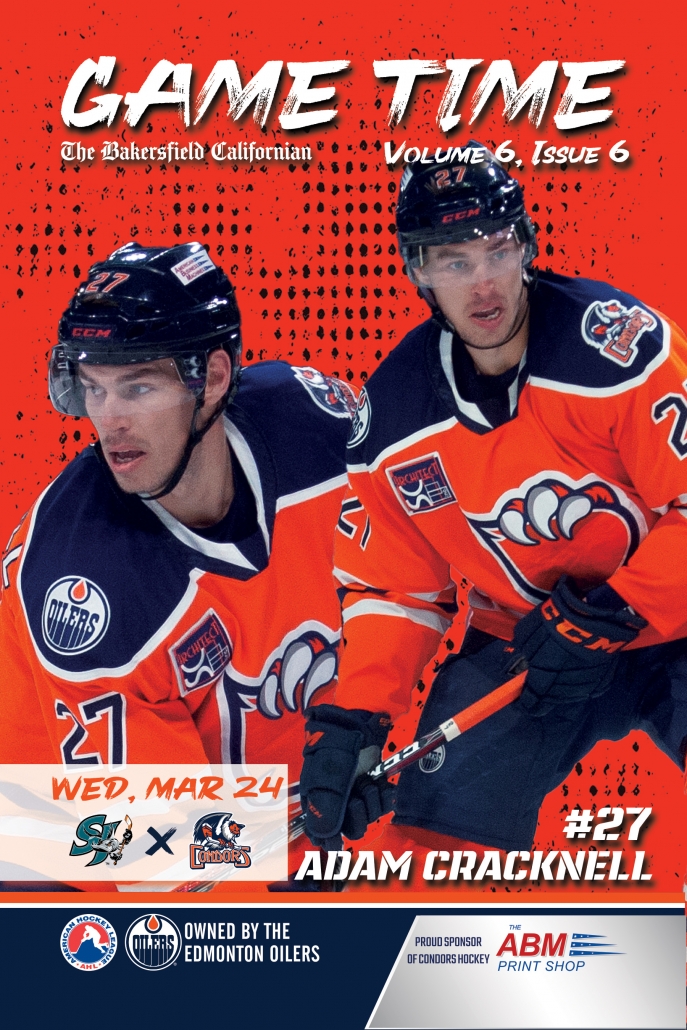 Download your copy of GAME TIME digitally by clicking the button below. This edition features a story om Adam Cracknell and 10 questions with Devin Brosseau as you get to know the rookie forward a bit better. 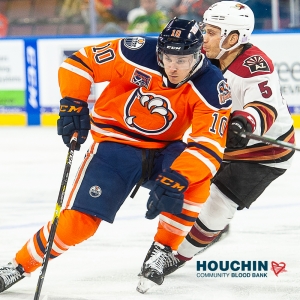 You can win a Jakob Stukel game-worn, signed jersey for just $10 today. Click the button below to get your raffle tickets with the winner announced during the third period.

TONIGHT
The Bakersfield Condors and San Jose Barracuda meet for the sixth of seven times in the month of March. The Condors are 4-1-0 against San Jose this season and 3-0 at home. Bakersfield is 8-0-1 overall in its last nine home games.

Bakersfield picked up a point in a 5-4 shootout loss to Ontario on Sunday. It was the first time this season the Condors did not win when leading after two periods (7-0-0-1). Cooper Marody extended a scoring streak to 13 games with his league-leading 14th of the season. Joe Gambardella scored for the third time in four games.

San Jose dropped a pair of games against Henderson over the weekend. They fired 38 shots in a 4-0 shutout loss to the Silver Knights on Sunday. G Zachary Sawchenko saw action in both games for the Barracuda.

After being held off the scoresheet for the first five games of the season, Adam Cracknell has 12 points (5g-7a) in his last 12 games.

Cooper Marody extended his league-leading point streak to 13 games on Sunday. He now has 13 goals and eight assists for 21 points over that span.

FINDING THE BACK OF THE NET

The Condors are up to fourth in the AHL in goals per game at 3.59. They have scored at least three goals a game over the past 13 contests.

Cooper Marody and Tyler Benson are 1-2 in the AHL scoring race. Benson leads the league in assists with 15… Seth Griffith has five points (1g-4a) in his last three games… Joe Gambardella has four points (3g-1a) in his last four games… Defensively, the Condors are 6th in goals against at 2.65… Stuart Skinner has played the second most minutes in the AHL at 766:08… The Edmonton Oilers signed 6th round draft pick Michael Kesselring to a three-year NHL contract Monday. The 6-5 blueliner also signed an AHL deal for the remainder of this season with the Condors.

Joachim Blichfeld is second in the AHL in goals with nine… Alexander True has seven points (3g-4a) in his last six games. He is also tied for the team lead in scoring with Blichfeld on 12 points… The Barracuda have deployed four goaltenders over their first 16 games.