It’s the week before the NHL Draft and there’s only one professional hockey game left to be played. Thankfully, there has been news out of Oilers camp to keep the blog packed with content other than random summer sports picks.

You may only come to the blog to find out my World Cup pick, and that’s fine we’ll get there, but as I’ll remind you, it’s my blog and I’ll do what I want.

– We start with what I consider a pretty important signing: Patrick Russell. Every offseason I start with a small sheet in line chart style. Naturally, it’s a long way off from opening night, but it helps me understand what the team *could* look like come October. As with any team, there are holes so I make a small 3-4 bullet point list of what the team would need based off that line chart. In the need column was “re-sign Patrick Russell.”

The #Oilers have signed Patrick Russell to a one-year contract. The forward recorded 27 points (14G, 13A) in 68 games with the @Condors last season. pic.twitter.com/fDcTYwSvgq

– Russell was the most durable Condors forward over the past two years, playing in all 136 games. All of his numbers nearly doubled in year two and he finished with 14 goals, three of which were game-winners. That led the team. His four shorthanded goals also led the team.


– The Condors penalty kill finished 10th in the AHL last season at 83.7% and was 4th on the road at 87.3%. Russell was one of, if not the most effective, killer the team had. Remember too, he was one of the final cuts made from Oilers training camp a year ago.

Then, we tied it thanks to a @PRussell63 shorthanded goal*

*this will be a trend pic.twitter.com/RGtqtJx5a3

– Edmonton also made some news with the acquisition and signing of Nolan Vesey, who just wrapped his college career at the University of Maine. Another one of those “needs” was a sizeable left winger. Vesey fits that mold at 6’0”, 212 lbs. He had 25 points (11g-14a) in 37 games last season.

The #Oilers have acquired forward Nolan Vesey from the @MapleLeafs in exchange for a conditional seventh-round #NHLDraft selection in 2020. We’ve also agreed to terms with Vesey on a two-year, entry-level contract. pic.twitter.com/epuqYfcsHq

– This week’s player profile was on Cooper Marody, who Condors fans got a glimpse of late last season. He was acquired by Edmonton in March and should he not make the Oilers out of training camp, would be a big addition down the middle for the Condors. Very skilled playmaker.


– Mentioned one last professional hockey game tonight in Toronto. It’s the 11th Game 7 in Calder Cup Finals history. None have been determined by sudden-death overtime. I know I don’t know the game, but I had no clue there was an era when overtime wasn’t sudden death, but that’s happened twice in Game 7 of the Calder Cup Finals. Let’s get some overtime and I’ll take the Marlies to win it. Game is on the NHL Network.

This one’s for all the marbles. Game 7 of the #CalderCup Finals is finally here.

– On the NHL Draft, the Oilers draft hub is a good marker to keep track of all things Oilers leading up to and including next weekend’s draft. While it’s likely none of these players picked next week will impact the Condors this season, it is extremely likely they will play roles in Condorstown in 2-3 years. So, it’s important.

The top two picks may be consensus from @Bob_Stauffer @EdmontonJack & the https://t.co/rKXr7PLP2B crew but anything can happen after that point during next week’s #NHLDraft per our @SportChek Mock Drafts. https://t.co/NRO56abLMu

– We’re off to Des Moines, Iowa for the AHL Team Business Marketing Meetings next week. Don’t worry, the blog doesn’t sleep on the road, so we’ll have a Midwest filing next Thursday. It’s where the league comes together on the business side to share ideas and hear from leaders at the NHL level and even outside hockey to improve for next season. Weather looks like it’ll be in the low 80’s which would be a 40-degree difference from last year’s meeting in Phoenix.

– This is the time of the year for meaningless sports picks for the lock of the week. Baseball doesn’t get interesting until at least late August so thankfully we have the US Open and the World Cup to entertain for the next month. We’ll start with the US Open on Long Island (yes I know it’s already underway). Much like the Masters pick, I’ll take Rickie Fowler to win his first major title.

– We had an office draw for the World Cup yesterday. Friend of the blog @WillHoenike had a family draw as well and got stuck with Panama, so that’s unfortunate. We split the 32-team field into the “Top 16” and the “Bottom 16.” My top team was Belgium and secondary team was Japan. The Belgians are 11/1 to win it all and are the 6th betting choice. I like that. Good odds and not an outright favorite. Let’s go all in on them. Seems like a lovely country.

– Finally, Sunday is Father’s Day. And since Chris Rock’s Father’s Day skit, while funny, isn’t really blog-friendly, I’ll share a funny pic of Ray Bourque with his jersey tucked in, turtlenecks, and my dad with a Mickey Mouse hat on. Credit to anyone if you can name the other Bruins player. Dads don’t get enough credit (except the big piece of chicken) and I’m thankful to have one of the best. 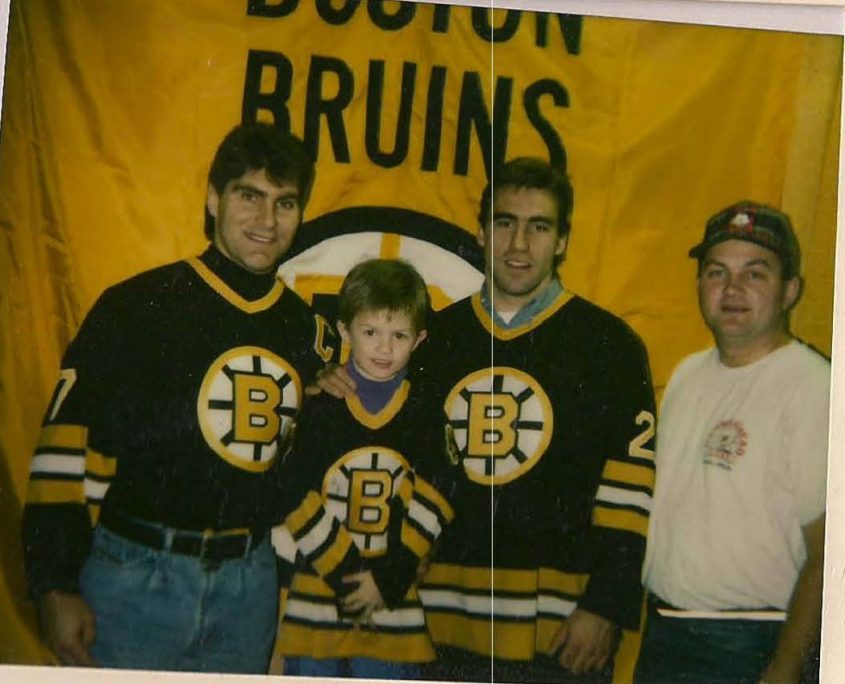 Ryan Holt aka Holty is the voice of the Condors and enters his 8th season in October. He’s looking forward to the tour of the Iowa Cubs ballpark, but more importantly, the food. Follow him on Twitter @CondorsHolty for more nonsense or shoot him an e-mail to RHolt@BakersfieldCondors.com with questions, comments, and blog ideas.