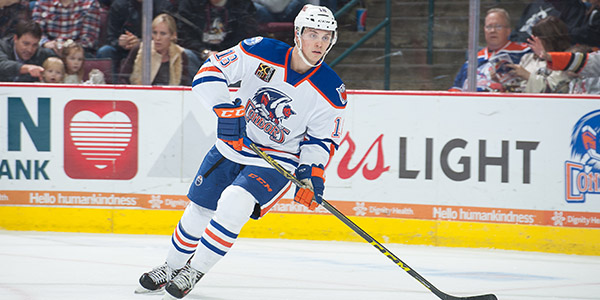 The above quote was from a year-end interview with the Condors bench boss heaping high praise on the team’s second-year blueliner. And rightfully so.

An Edmonton native, Simpson began the season injured, but did not let it deter him from turning in a fine second season.

In 57 games, the University of North Dakota product had 20 points (4g-16a). All three stat categories increased from the year prior even though he played in 14 fewer games due to injury.

More impressively, he was tied for the team-lead with a +8 and from November on he was +15. In his last 18 games, he was even or better in 14 of those contests including a season-high +4 performance on March 11 at San Diego.

Drafted in the 4th round (92nd overall) of 2011 draft, the 23-year old enters the third year of his three-year entry level contract in 2016-17 with an eye on taking the next step and returning home to Edmonton to play in the NHL.

NEED TO KNOW: Marino and more
Scroll to top