The Bakersfield Condors host the Henderson Silver Knights in the seventh matchup in the 10-game season series. Both teams have three wins so far, with the Condors winning three straight. Including tonight, four of the Condors final eight games are against the Silver Knights.

A limited number of tickets remain for tonight’s game and can be purchased below. Doors open at 5 p.m. 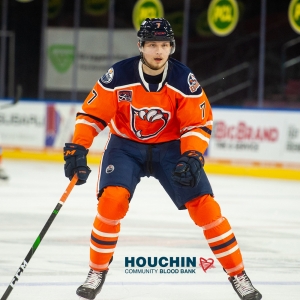 The Houchin Community Blood Bank Jersey raffle is just $10 per ticket with anyone, anywhere eligible to win. Click the button below to get your tickets. Winner announced during the third period tonight.

IN CASE YOU MISSED IT
Bakersfield lost in regulation for the first time this season when leading after two periods, 4-2, in San Jose last night. Adam Cracknell and Seth Griffith (1g-1a) had power play goals for the Condors. Olivier Rodrigue stopped 31 between the pipes.

Henderson split a two-game set over the weekend in Irvine, winning Sunday by a 5-4 overtime decision. Pavel Dorofeyev scored the overtime winner while Lucas Elvenes had three assists and was +4.

Stuart Skinner leads the American Hockey League in wins with 16, two more than any other netminder in the league. He has played the most minutes in the AHL, his goals-against average is seventh and his save percentage is sixth.

With his goal last night, Adam Cracknell became the fourth Condors player to hit double digits in goals with 10. He is now t-12th in the league scoring race with 25 points (10g-15a).

With two power play markers last night, the Condors had at least two man advantage goals for the fourth time this season.

Tyler Benson had an assist last night to move solo second in the AHL scoring race, two points behind Andrew Poturalski of San Diego. Benson has played in six fewer games… Seth Griffith has 23 points (6g-17a) in his last 25 games, including a multi-point night last evening… Brad Malone has nine points (3g-6a) in 12 games since returning from injury.